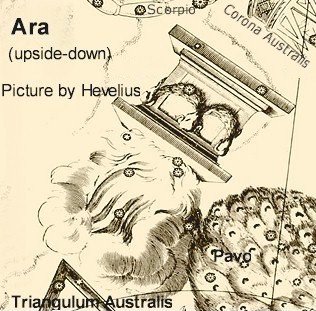 The orange supergiant Beta Arae is the brightest star in the constellation, with an apparent magnitude of 2.85—marginally brighter than the blue-white Alpha Arae. Seven star systems host planets. The sunlike star Mu Arae hosts four planets, while Gliese 676 is a binary red dwarf system with four planets. The Milky Way crosses the northwestern part of Ara.

In ancient Greek mythology, Ara was identified as the altar where the gods first made offerings and formed an alliance before defeating the Titans. The nearby Milky Way represents the smoke rising from the offerings on the altar.

Ara is one of the southernmost constellations depicted by Ptolemy.It had been recorded by Aratus in 270 BCE as lying close to the horizon, and the Almagest portrays stars as far south as Gamma Arae. Professor of astronomy Bradley Schaefer has proposed that ancient observers must have been able to see as far south as Zeta Arae to define a pattern that looked like an altar.

In illustrations, Ara is usually depicted as an altar with its smoke 'rising' southward.