Pomponius Mela, who wrote around AD 43, was the earliest Roman geographer. He was born in Tingentera (now Algeciras) and died c. AD 45.

His short work (De situ orbis libri III.) occupies less than one hundred pages of ordinary print. It is laconic in style and deficient in method, but of pure Latinity, and occasionally relieved by pleasing word-pictures. Except for the geographical parts of Pliny's Historia naturalis (where Mela is cited as an important authority) the De situ orbis is the only formal treatise on the subject in Classical Latin. 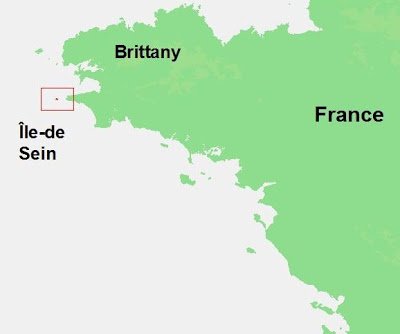 Île-de-Sein is a french islet in the Atlantic Ocean, 10 km off the extreme northwest of Finistère, 2 km long for at most a few hundred metres wide. Nowhere does it rise more than six metres above the surrounding ocean.
Lying on the sea routes going south from the English Channel, Sein is well known for the dangers of its waters. The Chaussée de Sein, a vast zone of reefs, stretches for more than thirty miles from east to west, requiring numerous lighthouses, to prevent increasing the large numbers of shipwrecks in the past.

In fact, the island has been inhabited since prehistoric times, and it was reputed to have been the very last refuge of the druids in Brittany.

In the Britannic sea, opposite the coast of the Ossimi, the isle of Sena [Sein] belongs to a Gallic divinity and is famous for its oracle, whose priestesses, sanctified by their perpetual virginity, are reportedly nine in number.  They call the priestesses Gallizenae and think that because they have been endowed with unique powers, they stir up the seas and the winds by their magic charms, that they turn into whatever animals they want and they cure what is incurable among other peoples, that they know and predict the future, but that it is not revealed except to sea voyagers and then only to those traveling to consult them.