Phenazopyridine is a chemical which, when excreted into the urine, has a local analgesic effect. It is often used to alleviate the pain, irritation, discomfort, or urgency caused by urinary tract infections, surgery, or injury to the urinary tract 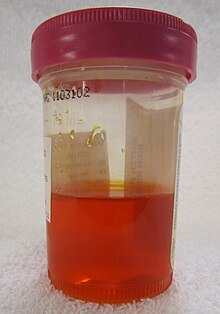 Phenazopyridine can also cause headaches, upset stomach (especially when not taken with food), or dizziness. Less frequently it can cause a pigment change in the skin or eyes, to a noticeable yellowish color. This is due to a depressed excretion via the kidneys causing a buildup of the drug in the skin, and normally indicates a need to discontinue usage Other such side effects include fever, confusion, shortness of breath, skin rash, and swelling of the face, fingers, feet, or legs Long-term use may cause yellowing of nails.

Phenazopyridine should be avoided by people with glucose-6-phosphate dehydrogenase deficiency,] because it can cause hemolysis (destruction of red blood cells) due to oxidative stress. It has been reported to cause methemoglobinemia after overdose and even normal doses. In at least one case the patient had pre-existing low levels of methemoglobin reductase which likely predisposed her to the condition. It has also been reported to cause sulfhemoglobinemia

Phenazopyridine is a type of azo dye Other azo dyes, which were previously used in textiles, printing, and plastic manufacturing, have been implicated as carcinogenic agents that can cause bladder cancer.   While phenazopyridine has not yet been shown to cause cancer in humans, evidence from animal models suggests that it is potentially carcinogenic.

Time on Phenazopyridine hcl when people have Death  :

Gender of people who have Death when taking Phenazopyridine hcl  :

Time on Phenazopyridine hcl tab when people have Death  :