Persepolis - The story of Jamshid 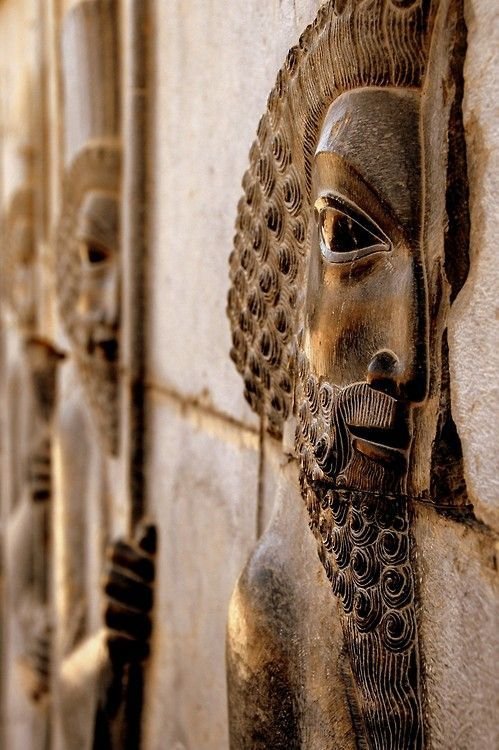 According to the Shāhnāma of the poet Firdausī, Jamshid was the fourth king of the world. He had command over all the angels and demons of the world, and was both king and high priest of Hormozd.

He was responsible for a great many inventions that made life more secure for his people: the manufacture of armour and weapons, the weaving and dyeing of clothes of linen, silk and wool, the building of houses of brick, the mining of jewels and precious metals, the making of perfumes and wine, the art of medicine, and the navigation of the waters of the world in sailing ships.

The sudreh and kushti of the Zoroastrianism are also attributed to Jamshid. From the skin-clad followers of Keyumars, humanity had risen to a great civilization in Jamshid's time.

Jamshid had now become the greatest monarch the world had ever known. He was endowed with the royal farr (Avestan: khvarena), a radiant splendor that burned about him by divine favor.

One day he sat upon a jewel-studded throne and the divs who served him raised his throne up into the air and he flew through the sky. His subjects, all the peoples of the world, marvelled and praised him. On this day, which was the first of the month of Farvardin, they first celebrated the holiday of Nawrōz ("new day"). In the variant of the Zoroastrian calendar followed by the Zoroastrians of India, the first day of the month of Farvardin is still called Jamshēd-i Nawrōz.

Jamshid was said to have had a magical seven-ringed cup, the Jām-e Jam which was filled with the elixir of immortality and allowed him to observe the universe.

Jamshid ruled well for three hundred years. During this time longevity increased, sicknesses were banished, and peace and prosperity reigned. But Jamshid's pride grew with his power, and he began to forget that all the blessings of his reign were due to God. He boasted to his people that all of the good things they had, came from him alone, and demanded that he should be accorded divine honours, as if he were the Creator.

From this time the farr departed from Jamshid, and the people began to murmur and rebel against him. Jamshid repented in his heart, but his glory never returned to him. The vassal ruler of Arabia, Zahhāk, under the influence of Ahriman, made war upon Jamshid, and he was welcomed by many of Jamshid's dissatisfied subjects. Jamshid fled from his capital halfway across the world, but he was finally trapped by Zahhāk and brutally murdered. After a reign of seven hundred years, humanity descended from the heights of civilization back into a Dark Age.