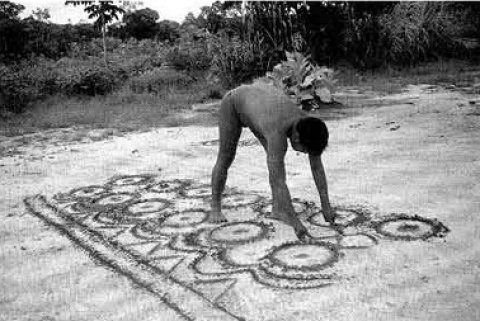 It seems that the [Turkano] Indians are able to engineer environmental cues and make use of bodily and emotional states to encourage and enhance the occurrence of entoptic phenomena.  During these flashback periods, they see the physical world overlaid with entoptic geometry, and it has been experimentally confirmed that when seen in this combination such patterns can take on a more definite form.  G Reichel-Dolmatoff was able to photograph Indians tracing out entoptic geometry on the sand.

……….Reichel-Dolmatoff noted that Choco Indians over a thousand kilometres to the north west of the Turkano have developed a similar entoptic art style, and they too take Banisteriopsis [a hallucinogen].