North Whitehead, Alfred – 11 The Tree of Life and the leaves of actuality 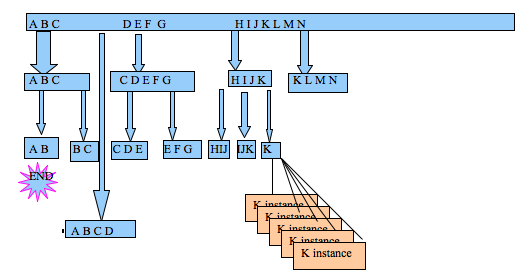 Thus the Intelligence hierarchy/Tree of Life is the master package for the universe.  It exists within one layer, each actual entity is then a copy of one of the branches of the tree, but so formed that it is in the end unique.  These are in a second layer.  Like the teeth of the Cheshire cat.

Fifi is an actual entity whose functions are derived from the master package of the universe – but she has the subset applicable to a white fluffy, poodle dog with a will of her own and enough courage to escape from her master.

Every actual entity is thus a leaf [or fruit or flower depending on the symbolism you wish to use] of the Tree of Life.

Whitehead’s Tree of Life is also a splitting of function into smaller and smaller subsets and the trunk is essentially ‘all function’ and thus God – the source of all function/processes .

But every aggregate has this Tree of life within it, - the entire universe is in some senses copied for every aggregate, even though only a tiny number of the functions will apply to the actual entity.

Chapter I  - Fact And Form

It is a contradiction in terms to assume that some explanatory fact can float into the actual world out of nonentity. Nonentity is nothingness. Every explanatory fact refers to the decision and to the efficacy of an actual thing. The notion of 'subsistence' is merely the notion of how eternal objects can be components of the primordial nature of God. This is a question for subsequent discussion (cf. Part V). But eternal objects, as in God's primordial nature, constitute the Platonic world of ideas.