Nibiru (also transliterated Neberu, Nebiru) is a term in the Akkadian language, translating to "crossing" or "point of transition", especially of rivers, i.e. river crossings or ferry-boats.

It is a symbolic term as the idea of the ferry or ferry man is the transition between either life and death or the ‘crossing over’ one achieves during the later stages of the spiritual path.  After moksha, nirvana and annihilation, one has ‘crossed  over’.  In some symbolic systems the ferry is replaced by the idea of a narrow bridge over an abyss,  although generally this is a different route – the red route not the blue route.

In Babylonian astronomy, Nibiru (in cuneiform spelled dné-bé-ru) was also a term of the equinox and its associated astronomical object(s).

Nibiru was considered the seat of the summus deus who ‘shepherds the stars like sheep’.

In Babylon, the writers somewhat hijacked the idea and identified it with Marduk. The establishment of the nibiru point is described in tablet 5 of the creation epic Enûma Eliš: “When Marduk fixed the locations (manzazu) of Nibiru, Enlil and Ea in the sky".

But the concept of Nibiru is better described by this cuneiform tablet:

Nibiru, which is said to have occupied the passageways of heaven and earth, because everyone above and below asks Nibiru if they cannot find the passage. ……: "The one who crosses the middle of the sea (Tiamat) without calm, may his name be Nibiru, for he takes up the center of it." The path of the stars of the sky should be kept unchanged.

Sumerian Tablette.. The winged disc in upper left of tablet depicts the 'immortal soul in flight', in other words like Egyptian iconography it shows the Higher spirit in the realm of the gods 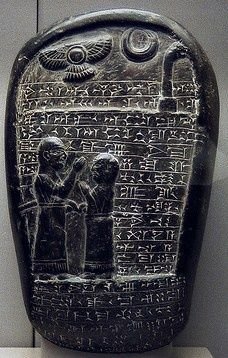