It was during the persecution of Muslims in Arabia, which grew gradually worse, that Muhammed reported an experience which had come to him in the night.

He had been taken out of his body by the angel Gabriel and had met the spirits of the great prophets of old -  Abraham, Moses, Jesus and others in the spirit world.  He was also show how the destiny of the world is 'written down'  - determined.

The little miniature below attempts to recreate this experience and shows Mohammed  visiting Paradise while riding Buraq, accompanied by the Angel Gabriel (upper left). Below them are some of the fabled 'houris' of Paradise -- the "virgins". This image is  Persian, 15th century, from a manuscipt entitled Miraj Nama, which is in the Bibliotheque Nationale, Paris. 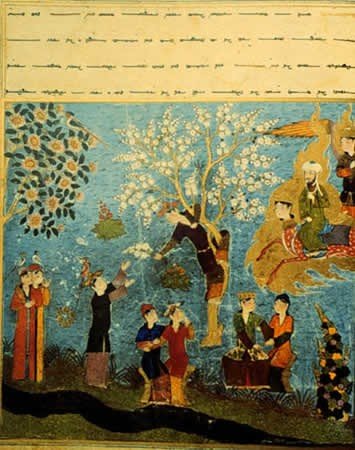