Mitsuo Aoki, nicknamed Mits (December 4, 1914 - August 19, 2010) was a Japanese American theologian and prfessor. He was born on a sugar-cane plantation near Hawi on the Island of Hawaii, and lived there until graduating high school. He then relocated to Honolulu for University training. 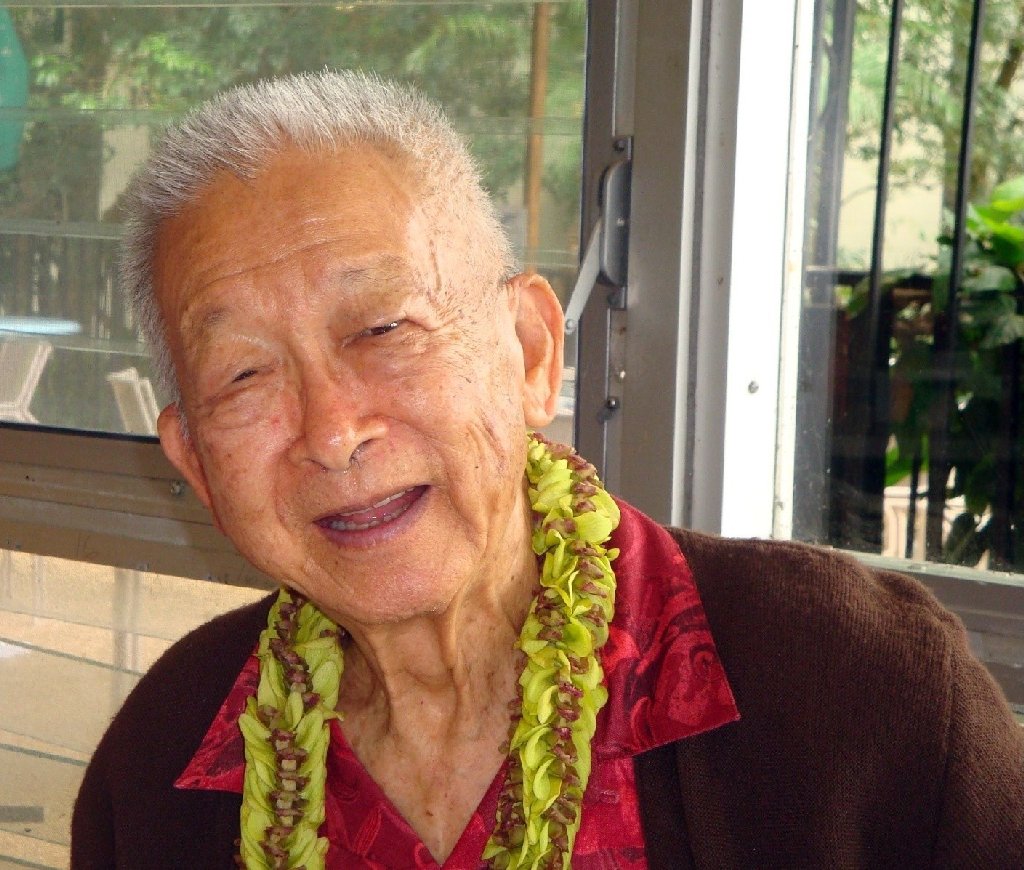 Clinically, Mitsuo Aoki "died" 25 years ago after a 1957 automobile accident.

He was a passenger in a car that hit a telephone pole near Wailupe Fire Station. The driver and a child in the front seat were killed instantly: Aoki was thrown from the automobile.

"I could see my spirit body lifting out of my corpse," he says today from his cluttered office at the University where he’s a professor of religion. "I could look down and see I was dead."

He saw the first people arrive on the scene and heard them say he was dead.

He didn’t talk about his out-of-body experience much at the time — he knew people would think he was crazy, or had hallucinated — but as the climate toward such experiences began to change he has shared it more completely.

And partly because of that experience, and his own interest in death and dying, he has become Hawaii’s foremost volunteer counsellor to the dying.

Today he is one of the University’s most popular professors. Students call him a "cosmic dancer," maybe because of his penchant for leaping up on his desk to dance in the midst of a lecture.

Aoki began studying death and dying 17 years ago and his primary education came from those who were dying. "I learned very quickly that dying people were my teachers," he says. And what he discovered was their amazing honesty, their ability to drop pretenses and defenses and to let go of material things. "They don’t fool around anymore. They go right to the heart of the matter."

He began to understand the stages of grief of both the dying person, and the family, and to learn how best to assist people in going through those stages.

In the years he’s been counselling — he responds to every call — he has helped hundreds of dying people and their families cope with their new, frightening, overwhelming emotions.

But in the last eight or nine years Aoki has found his work concentrating primarily on cancer patients, mostly because so many of the people he counselled were dying of cancer. The first step, he says, is to help the patient "get in touch with" his inner resources, his feelings, his spiritual and mental sides, and the sensations of his physical body.

When a person can draw on his own resources he can often manage to make his condition, including the physical and psychological pain, more tolerable.

So often, says Aoki, the person is destroyed by the "metaphors" of cancer — death, pain, fear, blackness, disease — before he’s destroyed by the disease. "All the apprehension and fear, that’s what destroys them. My job is to let them see that they’re not dealing with the reality of the cancer."

"We also encourage people to reach out and make contacts," he says. "All illness tends to shrink you, and one way to keep that from further diminishing you (as a human being) is the simple thing to get the phone and make contact."

Aoki has pioneered courses on death and dying at the University (he finds students who take them begin to appreciate life "so much more") and has helped co-found the newly organized Hospice Hawaii.

The latter is an organization to train volunteers as counsellors for the dying. Last year 20 people were trained to do the same work as Aoki. So far they’ve given more than 300 hours of their time. Another 20 people are taking the intensive eight-week training this year.

Aoki also was involved in setting up "Partners in Health," a support group for cancer patients or anyone with chronic pain.

Being in a car accident