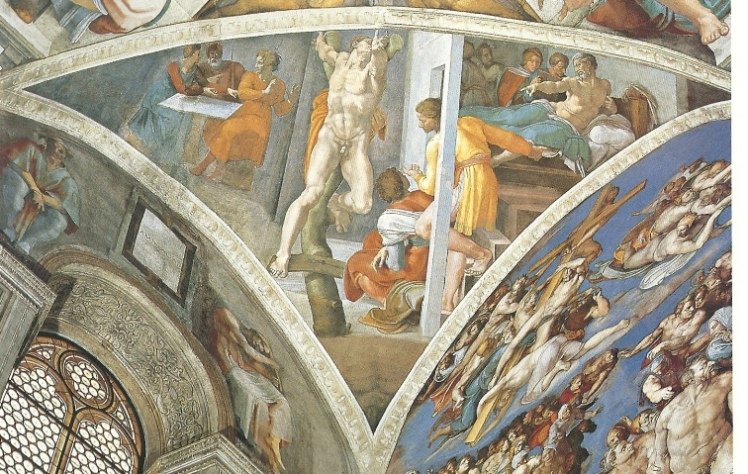 The Punishment of Haman

Haman and his wife Zeresh instigate a plot to kill all of the Jews of ancient Persia.  But Esther finds out about the plot and decides she needs to somehow involve the king

5 Now it came to pass on the third day, that Esther put on her royal apparel, and stood in the inner court of the king's house, over against the king's house: and the king sat upon his royal throne in the royal house, over against the gate of the house.
2 And it was so, when the king saw Esther the queen standing in the court, that she obtained favour in his sight: and the king held out to Esther the golden sceptre that was in his hand. So Esther drew near, and touched the top of the sceptre.

…..Which has its own somewhat interesting symbolism, but which is not entirely relevant to the story, although it does explain why the king was more than ready to do whatever Esther wanted.

3 Then said the king unto her, What wilt thou, queen Esther? and what is thy request? it shall be even given thee to the half of the kingdom.
4 And Esther answered, If it seem good unto the king, let the king and Haman come this day unto the banquet that I have prepared for him.

So the king and Haman came to the banquet that Esther had prepared.

6 And the king said unto Esther at the banquet of wine, What is thy petition? and it shall be granted thee: and what is thy request? even to the half of the kingdom it shall be performed.

But Esther simply asked that the king and Haman come to the banquet the next day too.  But this makes Haman both over confident and full of himself, he goes back and boasts to his family and maltreats Mordecai who is simply minding his own business by the king’s gate:

9 Then went Haman forth that day joyful and with a glad heart: but when Haman saw Mordecai in the king's gate, that he stood not up, nor moved for him, he was full of indignation against Mordecai.
10 Nevertheless Haman refrained himself: and when he came home, he sent and called for his friends, and Zeresh his wife.
11 And Haman told them of the glory of his riches, and the multitude of his children, and all the things wherein the king had promoted him, and how he had advanced him above the princes and servants of the king.
12 Haman said moreover, Yea, Esther the queen did let no man come in with the king unto the banquet that she had prepared but myself; and to morrow am I invited unto her also with the king.

But he is so full of pride that Mordecai’s behaviour niggles and he says so:

13 Yet all this availeth me nothing, so long as I see Mordecai the Jew sitting at the king's gate.
14 Then said Zeresh his wife and all his friends unto him, Let a gallows be made of fifty cubits high, and to morrow speak thou unto the king that Mordecai may be hanged thereon: then go thou in merrily with the king unto the banquet. And the thing pleased Haman; and he caused the gallows to be made.

But fate has a habit of revealing the truth

6 On that night could not the king sleep, and he commanded to bring the book of records of the chronicles; and they were read before the king.
2 And it was found written, that Mordecai had told of Bigthana and Teresh, two of the king's chamberlains, the keepers of the door, who sought to lay hand on the king Ahasuerus.
3 And the king said, What honour and dignity hath been done to Mordecai for this? Then said the king's servants that ministered unto him, There is nothing done for him.

So the truth is discovered.  At this point Haman appears in the outward court confident that if he asks the king to hang Mordecai on the gallows he had made, the wish will be granted because he thinks he, Haman, is the favourite.

Haman was of course extremely upset at this change of fortune and went back to his house complaining bitterly to his wife Zeresh and his friends, and they in turn tell him he shouldn’t accept this indignity lying down.  But as they do so the king’s chamberlains come to collect him for Esther’s banquet

2 And the king said again unto Esther on the second day at the banquet of wine, What is thy petition, queen Esther? and it shall be granted thee: and what is thy request? and it shall be performed, even to the half of the kingdom.
3 Then Esther the queen answered and said, If I have found favour in thy sight, O king, and if it please the king, let my life be given me at my petition, and my people at my request:
4 For we are sold, I and my people, to be destroyed, to be slain, and to perish. But if we had been sold for bondmen and bondwomen, I had held my tongue, although the enemy could not countervail the king's damage.
5 Then the king Ahasuerus answered and said unto Esther the queen, Who is he, and where is he, that durst presume in his heart to do so?
6 And Esther said, The adversary and enemy is this wicked Haman. Then Haman was afraid before the king and the queen.

7 And the king arising from the banquet of wine in his wrath went into the palace garden: and Haman stood up to make request for his life to Esther the queen; for he saw that there was evil determined against him by the king.
8 Then the king returned out of the palace garden into the place of the banquet of wine; and Haman was fallen upon the bed whereon Esther was. Then said the king, Will he force the queen also before me in the house? As the word went out of king's mouth, they covered Haman's face.
9 And Harbonah, one of the chamberlains, said before the king, Behold also, the gallows fifty cubits high, which Haman had made for Mordecai, who spoken good for the king, standeth in the house of Haman. Then the king said, Hang him thereon.
10 So they hanged Haman on the gallows that he had prepared for Mordecai. Then was the king's wrath pacified.

The story stands as a useful parable in its own right – those who live by the sword die by the sword, a sort of karmic come-uppance exists in the universe whereby those who plot hurt of any kind eventually get hurt themselves.

But there is an added spiritual and symbolic meaning that fits in with the pendentives.

Gates, outward court, inward court and king are all symbolic and are measures of spiritual progress.  The King is symbolically the Higher spirit in this case, the gates are the senses, the various courts then described the stages towards reaching the centre of the Egg – this can be seen by looking at the map of the Egg.

Mordecai is waiting at the entrance gate, even though he has been loyal and done the right thing he has not entered the king’s court – not been allowed true spiritual experience.  In contrast Haman is allowed in but for a purpose, it is a lesson.  In other words he is given a profound spiritual experience but only to expose his duplicity.

And Esther is in control.  The ‘feminine’ [subcnscious] is thus in control of what happens, where the ‘masculine’ [conscious] is allowed to go in the spiritual realm.

So the spiritual meaning here is that some spiritual experiences are only given to you to be part of a lesson and unless one recognises this, one never proceeds spiritually.  Furthermore, those who are patient and marry masculine with the feminine – recognising in all things the importance of the symbolic feminine in achieving experience – are eventually given their reward.

The spiritual path takes time and there are no quick fixes.

Michelangelo chose to represent Haman's fate as being one of being 'nailed to a cross'.  The symbolic meaning of this is to become physical - for a spirit to acquire a body.  Haman was condemned to be a physical being, unable to have any more spiritual experiences.