Intelligences - SIGNS OF THE ZODIAC [The Stars] 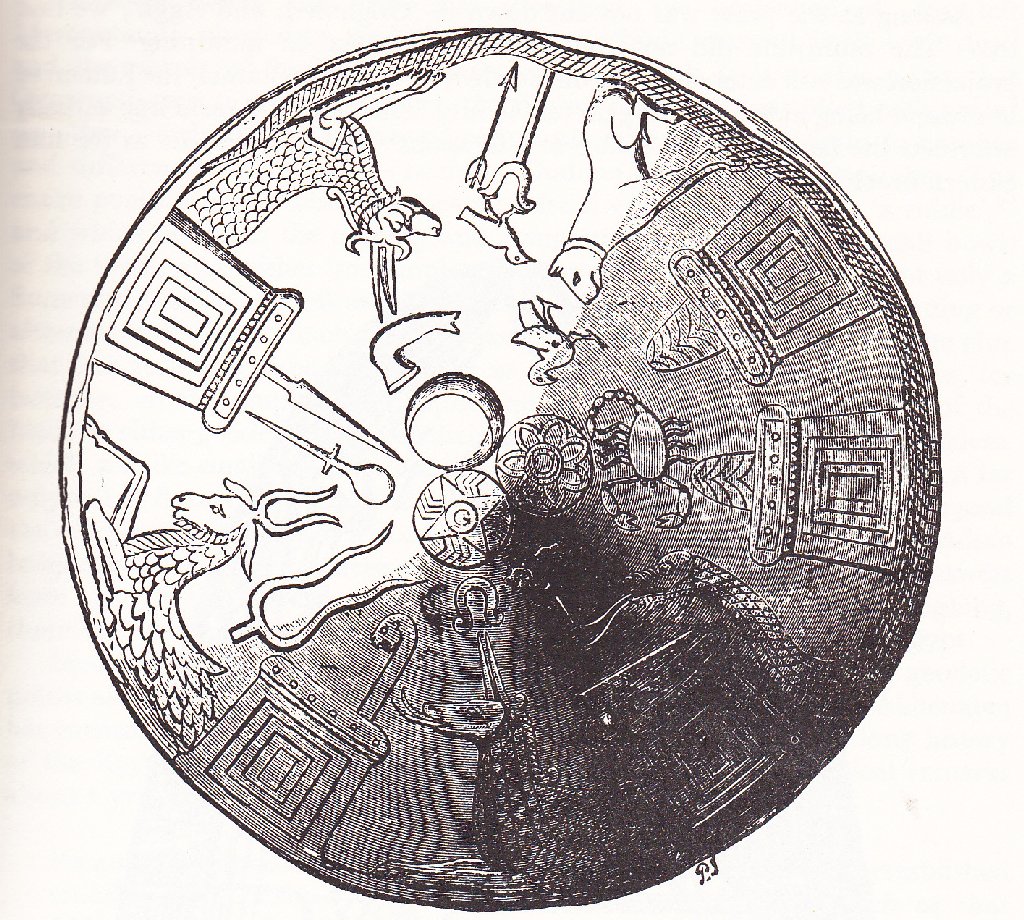 Design carved onto a babylonian omphalos

A great deal of astronomical mythology was handed down from the Sumerians. Constellations that we still use today, such as Leo, Taurus, Scorpius, Auriga, Gemini, Capricorn, and Sagittarius, were invented by the Sumerians..

The constellations provided a practical use for the people of ancient Mesopotamia. As in other societies, the orientation of the constellations was used to mark seasons for harvesting or sowing crops. Certain constellations were noted for their yearly rising or setting times, and provided an accurate clock by which time could be measured. The Babylonians kept written records of calendars used for planting.

The main astronomical tool was a water watch. Mesopotamian astronomers divided a day (24 hours) into 12 hours and every hour was divided into 30 "time degrees". One time degree had four of our minutes.  The clepsydra and the sundial were Babylonian inventions for measuring time. 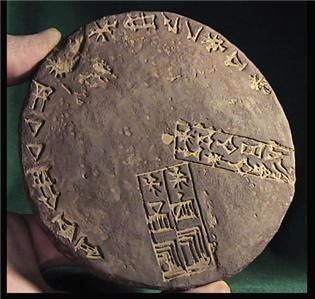 As a result of these deliberations, one of the most outstanding achievements of Mesopotamian astronomy became the development of mathematic theory and precise observation.  By using long term observations, for example, saros (Greek "repetition") was discovered i.e. the 18-year period of the repeated Moon eclipses.

In the 18th century BC, the Babylonian Empire standardized the year by adopting the ancient Sumerian calendar of the sacred city of Nippur. The priests there used a calendar which integrated the lunar year of 354 days and brought it in line with the solar-agricultural year by use of an "intercalated" cycle of months. The power and prestige of Babylon assured the success of the new calendar, which began in the Spring on Nissanu 1.

Source Myths of Babylonia and Assyria by Donald A. Mackenzie

Mr. Brown quotes Diodorus, who gave a résumé of Babylonian astronomico-astrology, in this connection. He said that "the five planets were called 'Interpreters'; and in subjection to these were marshalled 'Thirty Stars', which were styled 'Divinities of the Council'. . . The chiefs of the Divinities are twelve in number, to each of whom they assign a month and one of the twelve signs of the Zodiac. Through these twelve signs sun, moon, and planets run their courses. And with the zodiacal circle they mark out twenty-four stars, half of which they say are arranged in the north and half in the south."

Mr. Brown shows that the thirty stars referred to "constituted the original Euphratean Lunar Zodiac, the parent of the seven ancient lunar zodiacs which have come down to us, namely, the Persian, Sogdian, Khorasmian, Chinese, Indian, Arab, and Coptic schemes".

The three constellations associated with each month had each a symbolic significance: they reflected the characters of their months. At the height of the rainy season, for instance, the month of Ramman, the thunder god, was presided over by the zodiacal constellation of the water urn, the northern constellation "Fish of the Canal", and the southern "the Horse". In India the black horse was sacrificed at rain-getting and fertility ceremonies. The months of growth, pestilence, and scorching sun heat were in turn symbolized. The "Great Bear" was the "chariot" = "Charles's Wain", and the "Milky Way" the "river of the high cloud", the Celestial Euphrates, as in Egypt it was the Celestial Nile. 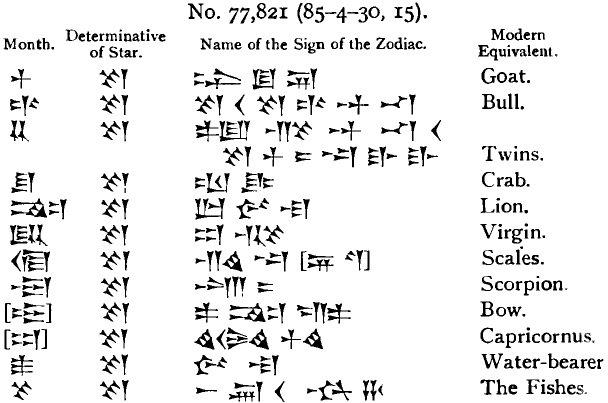 Our grave astronomers are no longer astrologers, but they still call certain constellations by the names given them in Babylonia.

The Babylonians believed there were twelve major gods, each of whom watched over one of the twelve Zodiac Signs. Our signs of the Zodiac are of Babylonian origin. They were passed on to the Greeks by the Phœnicians and Hittites. This we learn from the Bibliotheca Historica written by Diodorus Siculus, a first century B.C. Greek historian.  There is reason to believe that city states were also allocated to these but again difficult to find attributions.  We do know that Mesopotamia was covered by a net of temples, where they carried astronomical investigations, as such the city states [much like Stonehenge for example] served the dual role of spiritual centre and observatory.

Sites that may be dedicated to the Zodiac

Signs of the Zodiac
Stars