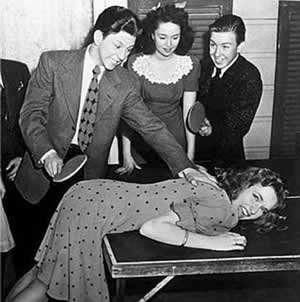 Interestingly, masochism in women receives comparatively little discussion in the early literature of the psychoanalyst (Freud, Krafft-Ebing, Havelock Ellis etc), as it was believed that masochism was so inherent to female sexuality and their submissive role in life that it was not worth discussing!

Even now, theorists believe that masochism is still an inherent part of modern Western culture and that sex and relationships operate within a framework of male dominance and female submission – citing in particular male literature – magazines such as GQ and so called newspapers such as the Sunday Sport as evidence.

As such, current sexual behaviour favours the woman in the egoless submissive role and may well lead to the woman obtaining spiritual experiences and not the man.

Ellis, however, did  touch upon the paradoxical nature of masochism especially for women. Masochistic acts are usually done for the benefit of the masochist, and it is often the masochist that controls them, through subtle emotional cues.  “So in reality the woman’s role is not entirely submissive.”  Thus the man has to be quite clever in sustaining true egoless results.

All early literature on the same themes
About sex and the meaning of all of our dreams
By all psychoanalysts highly regarded
Said ‘women and masochism’ should be discarded
So Ellis and Havelock, Ebing and Freud
Said that talk of this subject just got them annoyed
Women were by their nature submissive and weak
They sought domination, were quiet and meek
Submissive by nature, inferior of brain
Give them orders they’d do it again and again
You could beat them and ravage them just for a start
Make them lie on their backs with their legs wide apart
Then make them do the cleaning and washing straight after
If they didn’t, you’d whip them hanging from the rafter
And what’s more they liked it, this lack of dissension
They’d do anything just to get some attention

And have these things changed now we’re modern and equal
Does this opinion still hold or does it have a sequel?
Well the theorists say that meekness’s innate
It is there in the genes, it is part of their fate
That men will still dominate, women submit
And that women and dominance simply don’t fit
Masochistic by nature, masochistic by birth
It’s the same the world over, all over the earth
Our Western culture has not moved an inch
We’re the same as we always were, worse at a pinch
Women do as they’re told, they will always take orders
It’s behaviour that’s travelled across every border

And theorists say the proof were it needed
Is there in our literature and should be heeded
Men’s magazines show no women defiant
Provocative, naked but mostly compliant
The Sunday Sport revels in girls acquiescent
Who would never say no despite being pubescent
Who take spankings and beatings all in a day’s work
And from chainings and blindfoldings simply don’t shirk
They’ll take off their clothes at the drop of a hat
Make their boobs sizes larger, think nothing of that
Photographers go where gynaecologists cannot
As long as, of course, these girls are paid a lot

But aah maybe this is the answer we seek
Women are sort of submissive and they’re sort of meek
They are maybe, however, not being quite straight
Because who controls who is a subject of debate
Masochists maybe, but all masochists need
A person who’ll do what the masochist needs
So a man who will pay to see those publications
And a man who likes pole or lap dancing creations
And when two lovers meet - she submissive a tease
He all dominant loving and ready to please
It is he who must do what our masochist hints
From emotional cues subtly sent,  love succinct
So maybe the men don’t have all their own way
Pay attention my sweeheart and DO WHAT I SAY

Laughing
Squash the big I am