It is generally believed that Gandhi used the spinning wheel as a symbol of the need for India to get spinning and produce its own cotton goods in order to relieve itself of the British domination of its trade.  Furthermore he also promoted the idea that Indians would benefit from the act of spinning, back to basics, a sort of return to craftwork.  The particular spinning wheel he used was easily manufactured and transported and could thus be used by any villager to produce their own goods.

Thus the spinning wheel had some practical application for Gandhi.  But he used it a great deal himself for  relaxation and ‘meditation’ , as such the alternative use and the part it has played in history as a means of inducing light trance were known to him. 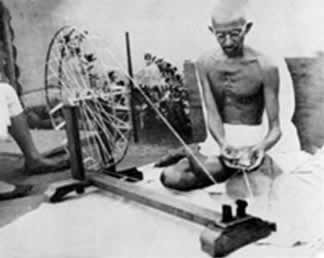