T J  Clark points out in his catalogue essay, working class life, for all its social and economic importance, plays a relatively minor role in our conception of 'British culture’. This is at least partly because the work of working class writers and artists has tended to be about the flight from the industrial world to the metropolis; think of the novels of D.H. Lawrence or David Storey. Lowry, however, kept himself in the world he portrayed. Far from working class himself, he nevertheless cultivated a staunchly lower middle class persona, maintaining a kind of passionate detachment from the industrial area in which he spent his most important painting years. Over his long career he produced landscapes, seascapes and enigmatic portraits of probably imaginary women, but it is for his urban scenes that he will be remembered. While he achieved the position of chief cashier, he maintained his rent-collecting round because of the access it gave him to his subject matter. 'I owe a lot to my tenants,’ he maintained later in life. 'I put them in my pictures.’ 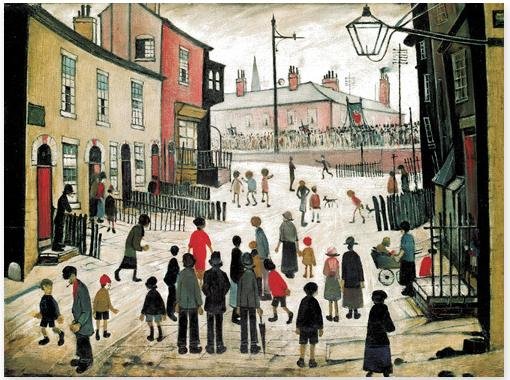