Lowry's father died in 1932, leaving debts. His mother, subject to neurosis and depression, became bedridden and dependent on her son for care. After his mother's death in October 1939, he became even more depressed.  This painting was completed in 1940.

The painting is fascinating as although it has an empty feeling, it is not gloomy, in fact the white bedspread and use of yellow indicate that maybe Lowry felt he had been through puragtory and was now coming out into a brighter world of light.

There may be a little attached symbolism to the bars of the bed - a cage which has opened and he has become free - or his Mum had.  The bird has flown. 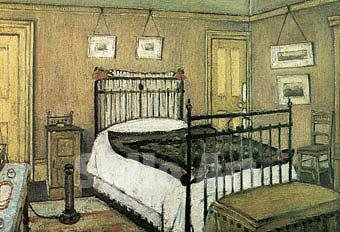