Note that in Hindu cosmology, a Manvantara is a cosmic period of time measurement. At the beginning of each Manvantara , a Manu is chosen to lead humanity. Thus in some descriptions we find that the name given to the Noah equivalent is Manu – which is not strictly speaking correct.

A Manvantara is thus a time period wherein Earth is settled by the chosen Manu. At the end of each Manavantara (and the beginning of the next) , a new Manu is chosen to lead humanity.  Up until now and again according to current cosmology, there have been 7 Manus :

We may be about to get the eighth 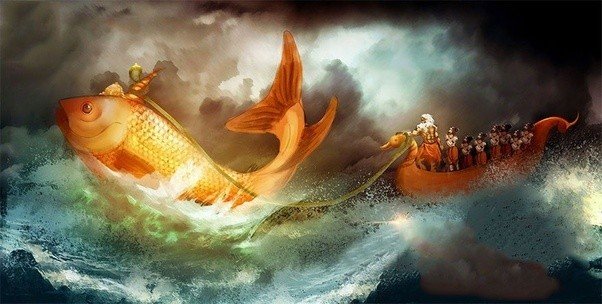 An abridged Vedic version of the event narrates the following:

According to the Lord's prediction, the earth became peopled, and the sons of Adima and Héva grew so numerous and so wicked that they could no longer agree among themselves. They forgot God and his promises, and ended by wearying him with the clamour of their bloody quarrels.

One day, King Daytha had even the audacity to launch his imprecations against heaven's thunder, commanding silence, and threatening in default, to conquer heaven at the head of his warriors.

The Lord then resolved to inflict upon his creatures a terrible chastisement, which should serve as a warning to survivors and to their descendants.

[Note -Thus we see Brahma did not, like the Jehovah of the Bible exhibit the weakness inconsistent with his prescience of regretting that he had created the world]

Brahma having cast his eyes over the world to discover the man who, of all others, deserved to be saved for the continuance of the human race, chose Vaiwasvata, because of his virtues. 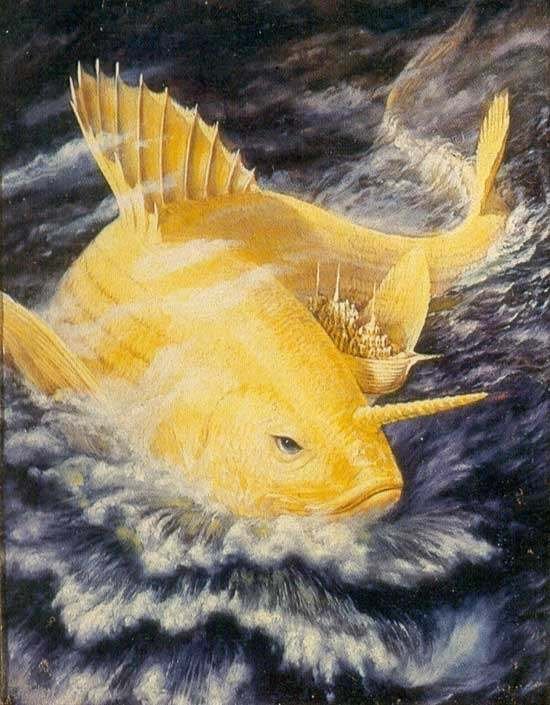 Vaiwasvata had reached that period of life when ardent servants of God should withdraw from family and friends, and retire into forests and deserts, to end their days in the midst of austerities and in perpetual contemplation of the pure divine essence.

One day as he came to perform his ablution on the sacred banks of the Viriny, a little fish of most brilliant colours came and threw itself upon the sand, crying to the holy man, “Save me! If you do not listen to my prayer, I shall inevitably be devoured by the larger fish that inhabit the river."

Moved with pity, Vaiwasvata placed it in the brazen vase, which served him to dip water from the river, and carried it home, where it grew so fast that a larger vessel being insufficient to contain it, Vaiwasvata was obliged to transport it to a tank, where its growth continuing with the same rapidity, it besought its preserver to convey it to the Ganges.

"That" answered the holy hermit, “ is beyond my strength, one should be Brahma's self now to withdraw you from where you are."

"At least try," replied the fish.

And Vaiwasvata having seized it, with the greatest facility raised and conveyed it to the sacred river, and not only was this enormous fish as light as a straw, but it also effused about itself the sweetest perfumes.

Vaiwasvata perceived that he was accomplishing the will of the Lord, and was in expectation of wonderful events.

The fish soon recalled him, and this time demanded to be transported to the ocean, which was accomplished with the same promptness.

It then said to its preserver:

"Listen, O wise and beneficent man: the globe is about to be submerged, and all that inhabit it shall perish, for behold the wrath of the Lord shall breathe upon the clouds and the seas, to charge them with the chastisement of this corrupt and wicked race, who forget their origin, and the law of God. Your fellow creatures can no longer contain their pride, and even dare to defy their Creator, but their offences have reached the foot of Brahma's throne, and Brahma is about to make known his power.

“Hasten, then, to construct a vessel in which you shall embark yourself with all your family.

"You will take also seeds of every plant and a couple of each species of animals, leaving all such as are begotten of vapours and rottenness - for their principle of life does not emanate from the great Soul.  And you will wait with confidence."

Vaiwasvata hastened to obey these instructions, and having constructed the ship, shut himself up with his family therein, with the seeds of plants and a couple of all animals, as had been said.

When the rain began to fall and the seas to overflow, a monstrous fish, armed with a gigantic horn, came and placed itself at the head of the ship, and Vaiwasvata having attached a cable to the horn, the fish darted forth to conduct and guide the ship in the midst of all the unchained elements.

And those in the ship saw that the hand of God protected them, for the fury of the tempest or the violence of the waves harmed them not. This lasted for days and months and years, until the work of destruction was entirely completed. The elements having calmed, the navigators, always guided by their mysterious conductor, were able to land on the summit of the Himalaya.

"It is Vischnou that has saved you from death," said the fish on leaving them, " it is at his prayer that Brahma has pardoned humanity - go now, re-people the earth and accomplish the work of God."

Note LJ - According to tradition, it was by reminding Brahma that he had promised to send him upon earth to lead back men to the primitive faith and to redeem their transgressions, that Vischnou obtained the preservation of Vaiwasvata, that the promise of God might be thereafter fulfilled.

This legend, we think, needs no commentary; and the reader will easily perceive all the consequent conclusions.  According to some, Vaiwasvata was the father, through his progeny, of all new peoples.  According to others, he had but to throw pebbles into the mud left by the waters, to produce men in as great numbers as he desired. 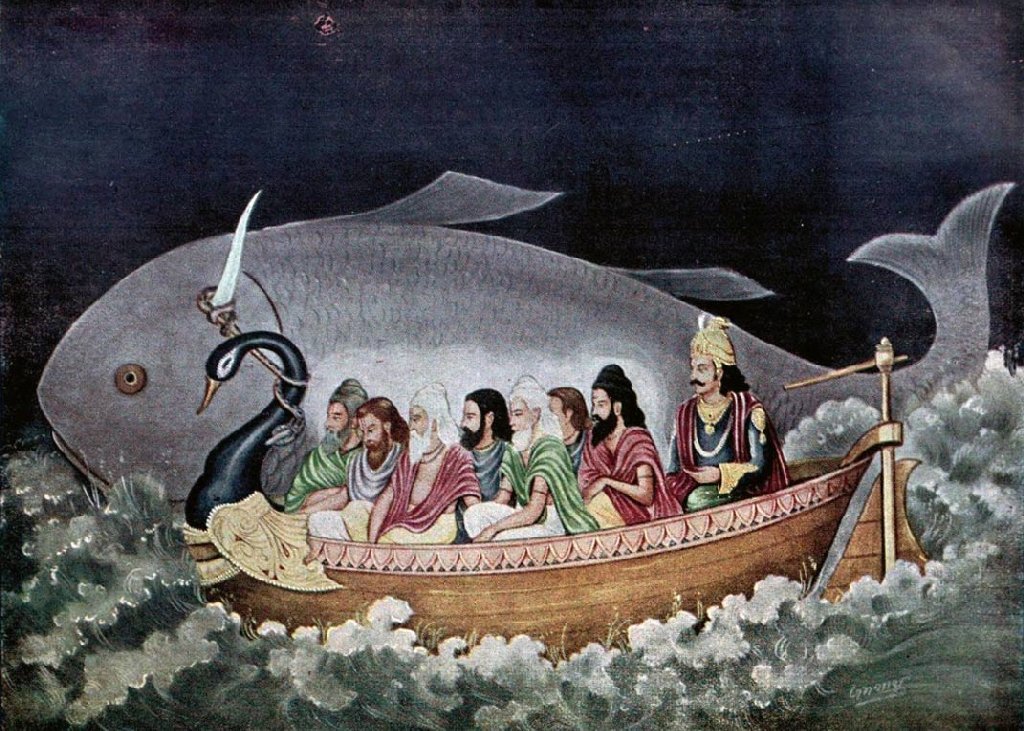