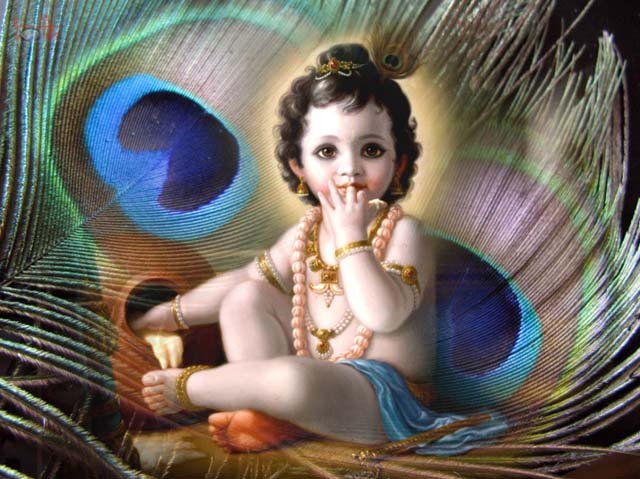 The first years of Devanaguy glided on in peace in the house of Nanda, and without the least attempt by the tyrant of Madura to entice her to him. On the contrary, he seized every occasion to send her presents, and to thank Nanda for the hospitality which he had extended to Lakmy and her daughter, which led all to believe that the light of the Lord had touched him, and that he had become good.

In the meantime the young virgin grew up midst her companions, surpassing them all in discretion and beauty. None better than she, although scarce six years of age, knew how to conduct the duties of the house, to spin flax or wool, and to diffuse joy and prosperity throughout the family.

Her happiness was in solitude -lost in the contemplation of God, who showered upon her all his blessings, and often afforded her celestial presentiment of what should happen to her.

One day as she was performing her ablutions on the banks of the Ganges, midst a crowd of other women who had come for the same purpose, a gigantic bird came sailing over her, and gently descending, deposited upon her head a crown of lotus flowers.

And all the people were amazed, and imagined that this child was destined for great things.

Meanwhile occurred the death of Lakmy, after a short illness, and Devanaguy learned in a dream that her mother had seen the gates of the blest abode of Brahma open themselves before her, because her life had always been pure and chaste, and it was not necessary to perform the usual funeral ceremonies on her tomb.

Devanaguy, whose person was on earth, but whose thoughts were in heaven, did not weep nor wear mourning for her mother as customary, for, as it is taught in the sacred books, she regarded death as a birth into the new life.

Having heard of the misfortune that had fallen upon his niece, the tyrant of Madura judged the moment propitious for the execution of his treacherous designs, and sent ambassadors to Nanda with many presents, praying restoration of the young Devanaguy to himself as her nearest relative, since the death of her mother.

Nanda was profoundly grieved at this proposition, for he loved the child equally with his own, and could not divest himself of forebodings that gave a darkening aspect to the future of Devanaguy at the court of her uncle.

Yet the request being just, he left the young girl free to accept or to reject it.

Devanaguy, who knew that destiny called her to Madura, accompanied the ambassadors sent by her uncle, after invoking all God's blessings upon the house she was leaving.

"Remember," said Nada, "that we shall be happy to see you again, should misfortune bring you back to us."

The forebodings of her protector had not deceived him. Scarcely was Devanaguy in the power of her uncle, when he, throwing off the mask, had her confined in a tower, of which he commanded the door to be walled up, to preclude the possibility of escape.

But the virgin was not distressed. She had already long received from heaven the knowledge of what should happen to her, and, full of confidence, she waited the moment fixed by God for accomplishing his celestial designs.

Yet the tyrant of Madura was not undisturbed: a frightful famine desolated his states. Death had robbed him, one by one, of all his children, and he lived in constant fear of the most dismal catastrophes.

Pursued by the idea, suggested by his dream of long before, that he was to be dethroned by a son born of Devanaguy, instead of repenting of the many crimes he had committed, and for which he had been already so severely chastised by the Lord, he resolved to relieve himself of all apprehension on this subject by destroying his niece. For this purpose he had poison - extracts of the most dangerous plants - mixed with the water and food passed each day to Devanaguy in her prison; but he was filled with alarm at the extraordinary fact -not only did the young girl not die, but she even seemed not to have perceived the poison.

He then left her without food, thinking that starvation might be more powerful than poison.

It was in vain; Devanaguy continued to enjoy the most perfect health, and, despite the most active vigilance, it was impossible to know if she received food from some mysterious hand, or if the spirit of God alone sufficed for her support.

Seeing this, the tyrant of Madura abandoned the idea of putting her to death, and was content to surround her prison with a strong guard, threatening his soldiers with the most fearful punishment if Devanaguy should elude their vigilance and escape.

But it was in vain; all these precautions could not obstruct fulfilment of the prophecy of Poulastya:

"The divine spirit of Vischnou passed through the walls to join himself to his well-beloved."