The truck driver involved in June's deadly crash in Oklahoma has been charged with 10 misdemeanor counts of negligent homicide. County District Attorney Eddie Wyant filed the charges on Monday. Each charge carries a maximum of one year in a county jail.

Donald Creed was driving the tractor trailer that slammed into a line of stopped cars along the Oklahoma turnpike on June 26, killing 10 people. Among those killed was a North Texas family - Shelby Hayes, her husband, Randall "Scott" Hayes, their 7-year-old son, Ethan, all of Frisco, and Shelby's mother, Cindy Olson, who lived in the Denton County town of Cross Roads. The investigation by the Oklahoma Highway Patrol ruled the cause of the wreck was driver inattention. Creed, 76, had a clean driving record, and investigators found no evidence that he applied the brakes or tried to take evasive action before the crash.

According to the AP story, the report also said that at the scene, Creed "stated that vehicles had driven underneath him while he was parked." Troopers noted that "Creed had no visual obstructions" and could have seen at least 2,400 feet prior to the initial impact. 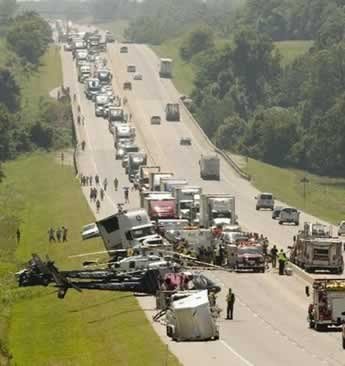 I'm sure there are many others like him out there on the roads. The fact that he states the other cars drove under his truck should be enough to confirm that he wasn't paying attenton to his driving.

That  seems to indicate he was hallucinating.

If the company had not let him drive, all these people would still be alive.