Polish Concert Pianist Builds a ‘Viola Organista’ Based on a 500-Year-Old Sketch from Leonardo Da Vinci November 18, 2013
(From http://www.thisiscolossal.com/2013/11/viola-organista/)

Youtube video of the Viola organista made by Sławomir Zubrzycki

Buried in the pages of Leonardo Da Vinci’s famous 15th century notebooks, amongst the sketches of flying machines, parachutes, diving suits, and armored tanks, was a curious idea for a musical instrument that merged the harpsichord and cello. The Italian Renaissance polymath referred to it as the viola organista. The general idea for the instrument was to correlate keyboard fingerwork with the sustained sound of a stringed instrument, but among the dozens of ideas pursued by the gifted artist and inventor, this was one he never explored further. Nearly 100 years would pass before an organist in Nuremberg would build the first functional bowed keyboard instrument, and many others would try throughout history to realize Da Vinci’s vision with various levels of success.

Now, after an estimated 5,000 hours of work over three years and nearly $10,000 invested in the project, Polish concert pianist Slawomir Zubrzycki has unveiled his own version of the viola organista. Not only is the new instrument gorgeous, it’s fully functional and Zubrzycki demonstrated it in public for the first time at the 5th International Royal Krakow Piano Festival a few weeks ago. Above is a video of that performance where you can hear how beautiful the strange instrument sounds. Via the Hindustan Times:

The flat bed of its interior is lined with golden spruce. Sixty-one gleaming steel strings run across it, similar to the inside of a baby grand. Each one is connected to the keyboard complete with smaller black keys for sharp and flat notes. But unlike a piano, it has no hammered dulcimers.Instead, there are four spinning wheels wrapped in horse tail hair, like violin bows. To turn them, Zubrzycki pumps a peddle below the keyboard connected to a crankshaft.

As he tinkles the keys, they press the strings down onto the wheels emitting rich, sonorous tones reminiscent of a cello, an organ and even an accordion. The effect is a sound that da Vinci dreamt of, but never heard; there are no historical records suggesting he or anyone else of his time built the instrument he designed. 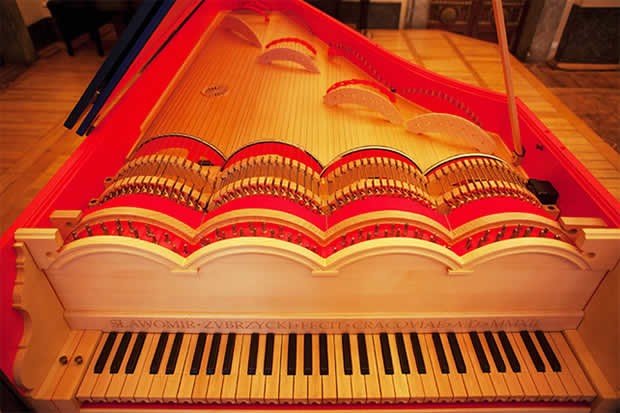 Being left handed
Listening to music