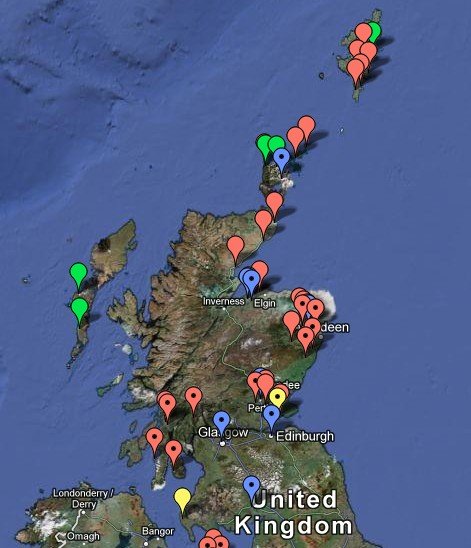 location of Ogham inscriptions in Scotland

The Ogham stones of Scotland are more typologically diverse and linguistically intriguing than those of any other part of Britain and Ireland. There are about 34 confirmed Ogham inscriptions on pillar stones, symbol stones, cross slabs, and natural rock faces, as well as five Ogham inscriptions that have been found on portable artefacts :

There are only three Ogham stones in the parts of Scotland corresponding to the Gaelic kingdom of Dalriada, all on or very near the coastline. Two of these are classic Ogham pillar stones with a Goidelic language Ogham inscription engraved along one of the natural edges of the stone, such as are found in Ireland : one on the island of Gigha (GIGHA/1) which has a typical "X, son of Y" formula; and one on the mainland at Poltaloch (POLCH/1) which has a single personal name. These two stones may reflect the first wave of colonization of Scotland by Gaelic speakers from Ireland during the 5th and 6th centuries.

The only other Ogham stone to have been found in this area is a fragmentary block from Lochgoilhead (LOHED/1), which has a number of unusual features not found on classic Ogham pillar stones: the stone has the remains of both an Ogham inscription and a Latin inscription (only one of two such stones in Scotland); and the Ogham inscription is engraved on an artificial stemline on the surface of the stone rather than along the edge of the stone. As the name represented by the Ogham inscription has been interpreted as being Goidelic, and there are no Pictish-style decoration on the stone, it is probably also a product of Gaelic settlers in the area, although the Latin inscription suggests a later date than the two Ogham pillar stone, perhaps the 7th or 8th century.