In the aftermath of war Knight proposed to the War Artists' Advisory Committee the Nuremberg war crimes trials as a subject. The Committee agreed, and Knight went to Germany in January 1946 and spent three months observing the main trial from inside the courtroom. The result was the large oil painting, The Nuremberg Trial. This painting departs from the realism of her wartime paintings, in that, whilst realistically depicting the Nazi war criminals sitting in the dock, the rear and side walls of the courtroom are missing, to reveal a ruined city, partially in flames.

Knight explained this choice of composition in a letter to the War Artists' Advisory Committee:

In that ruined city death and destruction are ever present. They had to come into the picture; without them, it would not be the Nuremberg as it now is during the trial, when the death of millions and utter devastation are the sole topics of conversation wherever one goes – whatever one is doing. 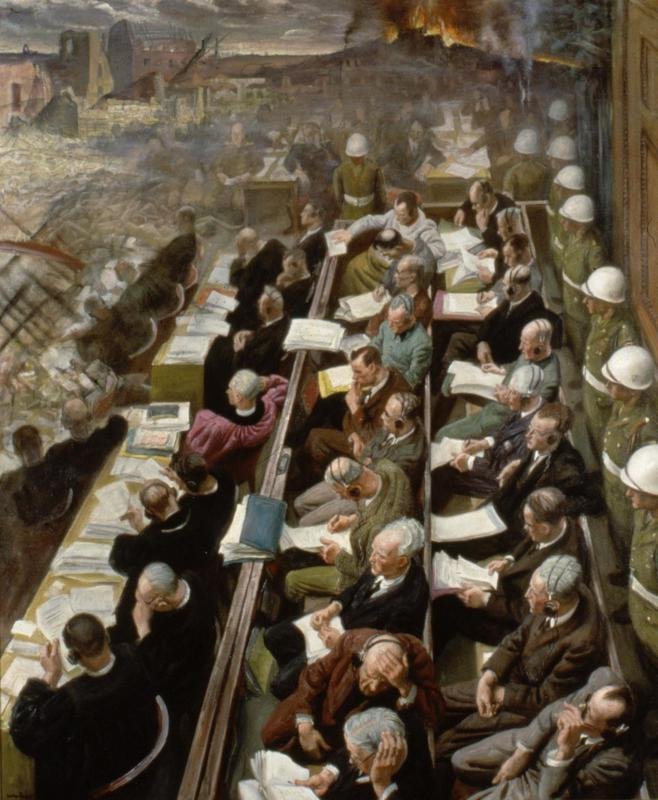 Knight became the first female artist since 1768 to become a full member of the Royal Academy. Her high standing enabled her to request an assignment to the International Military Tribunal at Nuremberg in 1945, which resulted in her painting The Nuremberg Trial. The tribunal tried 21 leading Nazis, headed by Hermann Goering. Knight was deeply disturbed by what she heard during the trial, and the realism of the courtroom in her painting is ruptured by the rubble of the city of Nuremberg shown as a ghostly backdrop.

"The trials just fired her imagination," says Palmer. "She drew many of the key Nazis in the dock. Unusually for her, it showed the back wall of the courtroom to have dissolved and the ruins of the city of Nuremberg lying there. She felt the destructive force of war needed to be in the painting."