Irene Muza prophesies her own death 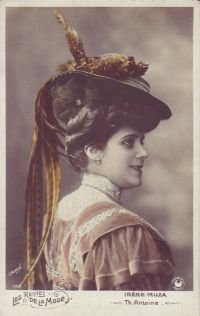 Death and its Mystery, At the Moment of Death; Manifestations and Apparitions of the Dying – Camille Flammarion

Letter from Mademoiselle Dudlay of the Comedie Francaise concerning a young actress Irene Muza who was burned to death in 1909.

Irene was a convinced spiritualist and several months before the incident during a séance, in which she was in a deep hypnotic sleep, they asked her if she saw what awaited her, personally, in the future.

She wrote the following ‘My career will be short; I dare not say what my end will be; it will be terrible’

The experimenters, much impressed, erased the words before she awakened; thus, consciously at least, she never knew what a terrible thing she had predicted for herself.

Several months afterward her hair dresser was sprinkling her hair with an antiseptic lotion made of mineral essences, when she let several drops of the liquid fall on the lighted stove.  These instantly flamed up; fire enveloped the hair and clothing of the actress, who in a second was wrapped in flame and suffered such burns that she died at the hospital a few hours later.