Ninurta was a Sumerian and the Akkadian god of hunting and war.  He is equivalent to Mars.  Saturn appears to be mixed up in depictions and attributions with Ninurta and even the name given here may not be right.  In some accounts Nergal is attributed to Mars, but Nergal is very definitely the Lord of the underworld.

The naming here is not clear, in Lagash , for example, he was linked with the city god Ningirsu.  But Nirig – Saturn - was known as Ninip, Ninib, and Ningirsu. 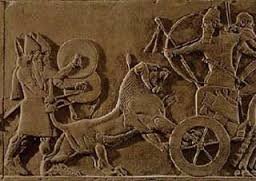