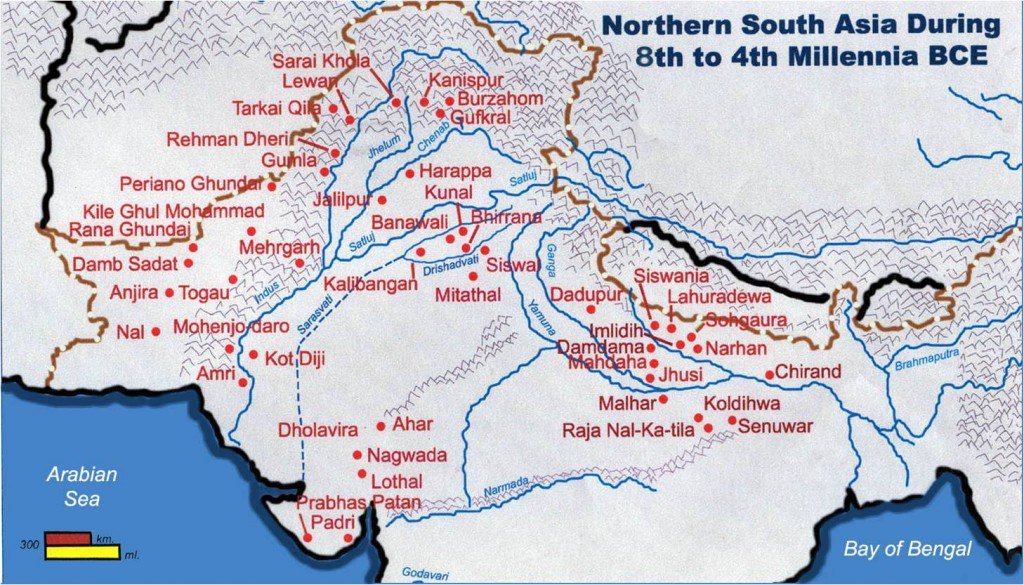 The Indus Valley Civilisation (IVC) was until recently classified as a ‘Bronze Age civilisation’ (3300–1300 BCE; mature period 2600–1900 BCE) .  But this viewpoint is now being questioned, because Scientists from IIT-Kharagpur and Archaeological Survey of India (ASI) have recently uncovered evidence that the Indus Valley civilization is at least 8,000 years old and not 5,500 years old as earlier believed. This discovery, published in Nature on May 25, 2016, makes the Indus Valley civilization theoretically older than the Mesopotamian civilisation.  It may even be the oldest civilisation in this area of the east.

The Indus Valley Civilisation encompassed much of Pakistan, western India, and northeastern Afghanistan; extending from Pakistani Balochistan in the west to Uttar Pradesh in the east, northeastern Afghanistan to the north and Maharashtra to the south. It flourished in the basins of the Indus River, which flows through the length of Pakistan, and along a system of perennial, mostly monsoon-fed, rivers that once coursed in the vicinity of the seasonal Ghaggar-Hakra river in northwest India and eastern Pakistan.

The geography of the Indus Valley put the civilisations that arose there in a highly similar situation to those in Egypt and Peru, with rich agricultural lands being surrounded by highlands, desert, and ocean.

The Indus Valley civilisation was an extremely advanced civilisation.  The cities of the Indus Valley Civilization had "social networks, a writing system, large planned cities and long-distance trade [which] mark them to archaeologists as a full-fledged 'civilization.'"

The Indus valley, the Dravidians and Shaivism

We know that this was an area dedicated to the divinity Shiva/Shakti because every artefact found tells us so, the symbolism is that of Shiva/Shakti, the pictures are of Shiva/Shakti and the use of sacred geography indicates a spiritually based civilisation organised along similar lines to that of Mesopotamia before the priest kings took over.

Sir John Hubert Marshall, was the Director-General of the Archaeological Survey of India from 1902 to 1928. He was responsible for the excavation that led to the discovery of Harappa and Mohenjodaro, two of the main cities that comprise the Indus Valley Civilization.  Sir John managed to identify the use of Shaivism in 1931 when he pieced together the evidence he needed: a Great Male God and a Mother Goddess; deification or veneration of animals and plants; symbolic representation of the phallus (linga) and vulva (yoni); and, use of baths and water in religious practice – this is the use of step wells.

We know they were Dravidians because in February 2006 a school teacher in the village of Sembian-Kandiyur in Tamil Nadu discovered a stone celt (tool) with an inscription estimated to be up to 3,500 years old.  Indian epigraphist Iravatham Mahadevan ‘postulated that the four signs were in the Indus script’ and called the find "the greatest archaeological discovery of a century in Tamil Nadu". Based on this find and knowing what had been found in the Indus valley and the correspondences, he was able to state that the language used in the Indus Valley was of Dravidian origin.  This said, the Indus script is still undeciphered. “A relationship with the Dravidian or Elamo-Dravidian language family is favoured by scholars.”

The Dravidian language was used over a very large area at one time and judging from the dispersal of Indus civilisation artefacts, the trade networks economically integrated a huge area, including the coastal regions of Persia, and Mesopotamia. There is some evidence that trade contacts extended to Crete and possibly to Egypt.  Finnish Indologist Asko Parpola has also concluded that the uniformity of the Indus inscriptions precludes any possibility of widely different languages being used, and that an early form of Dravidian language must have been the language of the Indus/Dravidians as a whole.

Mukherjee (2001):
…. about 15,000-10,000 years before present (ybp), when agriculture developed in the Fertile Crescent region that extends from Israel through northern Syria to western Iran, there was another eastward wave of human migration (Cavalli-Sforza et al., 1994; Renfrew 1987), a part of which also appears to have entered India. This wave has been postulated to have brought the Dravidian languages into India (Renfrew 1987). Subsequently, the Indo-European (Aryan) language family was introduced into India about 4,000 ybp.

There is no conclusive evidence of kings, armies, or priests. Furthermore there are no hierarchical organisation structures.  Dravidian society was at one time matriarchal [Danielou] and there is every appearance that this is how the society functioned.

Another indication of the matriarchal society that ran this well ordered civilisation, is that although some houses were larger than others, Indus Civilisation cities were remarkable for their egalitarianism. Here, everyone had a good house, but no one had an ostentatious house and all the houses had access to water and drainage facilities.  Big houses and ostentation are a sign of ego dominated societies – extremes of wealth and poverty predominate the more the ego and ‘masculine’ qualities predominate.

Archaeological records provide no evidence for a centre of power or for depictions of people in power in Harappan society. But, there are indications of complex decisions being taken and implemented. For instance, the majority of the cities were constructed in a highly uniform and well-planned grid pattern, suggesting they were planned by a co-operating group – a council of the wise.  The Indus valley system thus appears to have been run by groups of sages [men and women] largely organised, led and co-ordinated by women.

The civilisation was able, for example, to standardise the size of bricks.  Furthermore, the people of the Indus Civilization achieved great accuracy in measuring length, mass, and time; and were among the first to develop a system of uniform weights and measures. It appears that the base unit was very close to the English Imperial ounce or Greek uncia.  This may seem trivial, but in Europe today – largely run by men - there are hundreds of different sizes of light fitting which means buying a light bulb requires considerable patience.  They were better organised than we are.

Overview of the sites

The Indus Valley Civilisation is also known as the Harappan Civilisation, after Harappa, the first of its sites to be excavated in the 1920s. As of 1999, however, over 1,056 cities and settlements had been found, of which 96 have been excavated, mainly in the general region of the Indus and Ghaggar-Hakra Rivers and their tributaries. Excavations at Bhirrana, Haryana, in India between 2006 and 2009, by archaeologist K. N. Dikshit, provided six artefacts, including "relatively advanced pottery," so called Hakra ware, which were dated at a time bracket between 7380 and 6201 BCE. These dates compete with Mehrgarh for being the oldest site for cultural remains in the area.

Among the settlements were the major urban centres of

Coastal settlements extended from Sutkagan Dor in Western Baluchistan to Lothal in Gujarat. Many other ancient sites are now being attributed to this civilisation, but the attribution may not actually be correct.  Sites later than about 2,500 BC may well be Aryan/Scythian not Indus valley sites or a combination of the two cultures.  True Indus Valley sites have been found most often on rivers, but also on the ancient seacoast and on islands, for example, Dholavira.

Spiritually water is exceptionally important to a civilisation based on sacred geography, whether rivers and streams, oceans and the sea or islands in lakes or the sea, and although there are obvious advantages to being near water simply from a survival point of view, the choice of sites suggest survival was combined with spirituality.

Islands, for example, are especially sacred and there is evidence of many Indus Valley sites along the Ghaggar-Hakra beds, thus potentially ‘in’ the river. Among them are: Rupar, Rakhigarhi, Sothi, Kalibangan, and Ganwariwala.  According to some archaeologists, more than 500 Harappan sites have been discovered along the dried up river beds of the Ghaggar-Hakra River and its tributaries, and about 100 along the Indus and its tributaries.