Large bells were a common part of Shinto temples.  The picture below by Hiroshige shows a Temple compound on a hill and comes with the poem

Now this can have a literal meaning of course, but most of Hiroshige’s paintings are also symbolic.

If we take the symbolism as well, a bell is also a cone and a musical instrument.  Thus when whoever it was representing the bell was ‘played’, he becomes quite powerful.  Thus by implication ‘the bell of the Lotus sect’ was a person, and a powerful person at that if all the symbolism is taken into account. 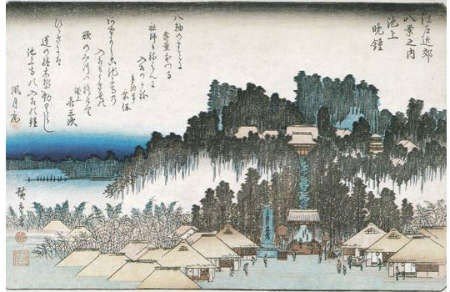