Both savants and the autistic can be given ‘functions’ that are there to improve creativity and mathematical ability.  But they are not alone in getting new function, it did occur to me that although these are obvious cases, we might well be getting new functions ourselves – the more ordinary of us.

There does seem to be reason to suspect that the spiritual world sends all of us new functions and amended functions, much as Microsoft does when it sends us updates and amendments or new functions whenever we log off from Windows but are connected to the Internet.  Generally speaking I suspect we get them in our sleep, but we may also get them during the day – particularly if the changes needed are large.

Such large changes take place in people over their life,   - from baby to adolescent to adult and then to old age, with sudden new abilities and new functions ‘kicking in’ at very specific points,   - that there does seem to be a form of rather unscientific evidence that functions are being downloaded all our lives.

The alternative of course is that we may be receiving instructions to make functions we already have active.  When a woman faces the menopause for example, she experiences a huge number of functional changes and all the functional changes may be triggered.  Women even experience the ‘heat of the mystic’ during the input process because the experience is so intense.  Adolescents face similar functional changes – not just physical changes - and sweat profusely as well as have an over powering urge to sleep.

In this case though, I suspect the process itself is extremely simple.  The composer collects the functions/instructions needed and accepts them, storing them for the recipient or acting on them to ensure changes are made.

The other evidence I uncovered was that under the influence of hallucinogens in particular, people have managed to gain access to functions which were not, as it were, the functions of the ‘human being package’, but functions invented by humans.  Thus, for example, specific dances or other sorts of unusual function that the subject had never been taught and in some cases had not even seen, were suddenly made accessible to him or her as an ability 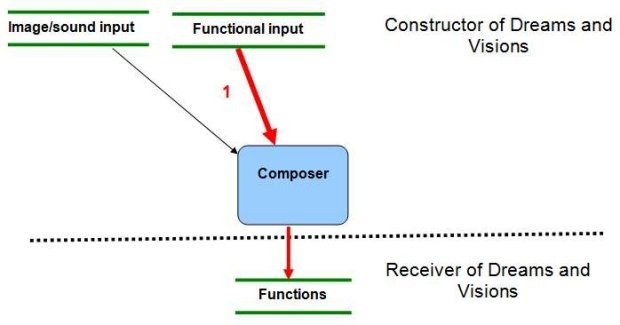 It is not uncommon that in association with specific LSD experiences some subjects discover the meaning of various symbolic gestures (mudras) or spontaneously assume quite unusual postures (asnas) known from Hatha Yoga.

In several instances, individuals enmeshed in elements of a certain culture felt a strong need to dance.  Without any previous training or specific exposure to these cultures, they were able to perform complicated dance forms.

Examples of such behaviour observed in LSD sessions range from the !Kung Bushman Trance dance and other tribal rituals, Middle Eastern belly dancing and whirling like the dervishes of the Sufi tradition, to Indian art forms as practised in Java or Bali, and the symbolic dancing of the Indian Kathakali or Manipuri school.