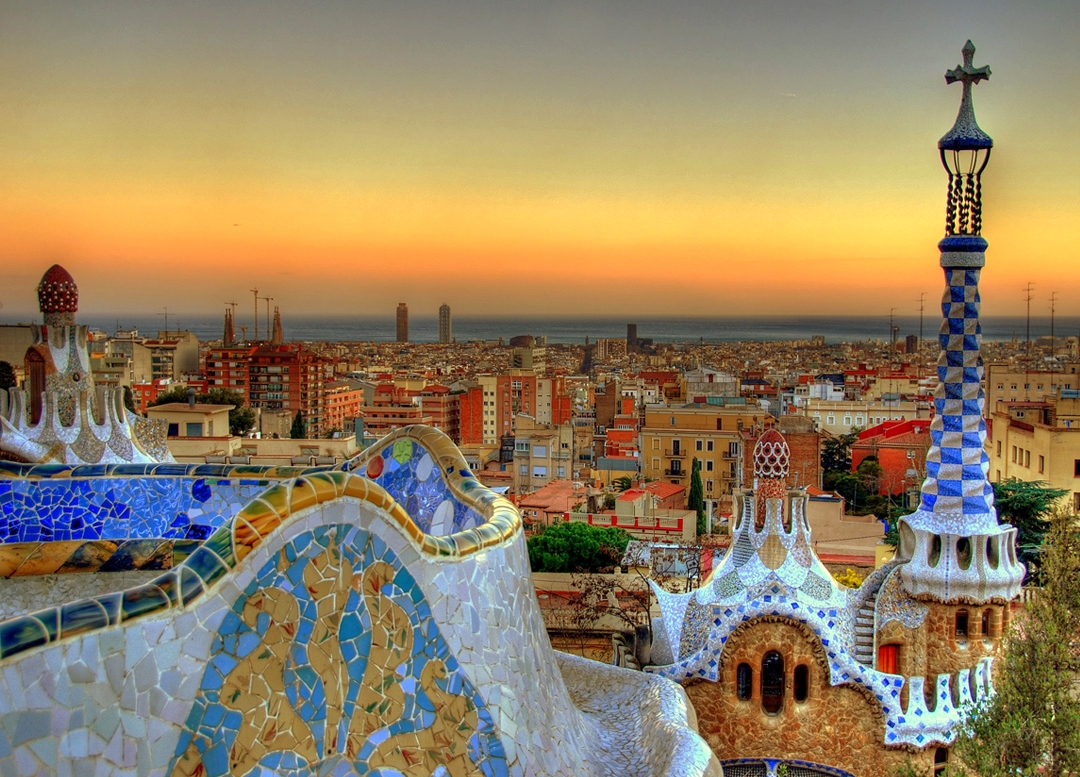 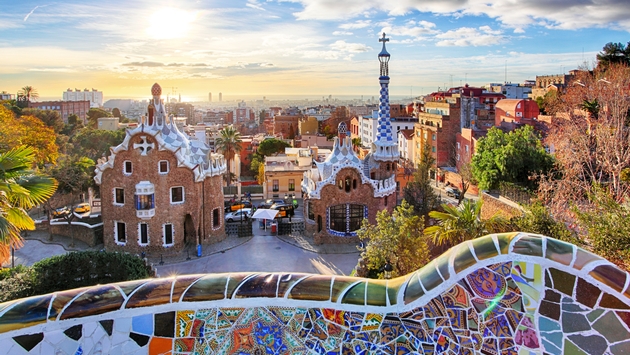 Gaudí's main project at the beginning of the 20th century was the Park Güell (1900–1914), commissioned by Eusebi Güell.  At the time, the patron-architect relationship was well established following several previous commissions, such as El Capricho, the Güell Estate and Palau Güell.

This much-loved park, which is greatly appreciated by the people of Barcelona, also gained appreciation the whole world over in 1984, when it was declared a UNESCO World Heritage Site.

Developer Count Eusebi Güell set out to create a housing development inspired by the English garden city movement. Garden cities were planned self-contained communities that combined amenities, residential housing, agricultural, and green space [parks and gardens] . It was given the name of ‘Park’ Güell due to the influence of the British residential parks that Eusebi Güell so loved, and his request to recreate them. 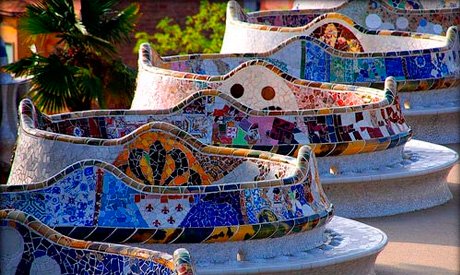 The original request was to create a housing development for families within an estate of over 17 hectares, popularly known as the Bare Mountain.  The Park Güell is situated in Barcelona's Càrmel district, a rugged area, with steep slopes.  As such from the very start the development faced difficulties.   Count Guell also imposed a series of extremely restrictive requirements such as, for example, the fact that building could only be carried out on a sixth of the estate. Furthermore, its location and height was not to obstruct sunlight or prevent residents from seeing the sea views and the Barcelona esplanade.

Work started in October 1900. The first thing that was done was to level out the land for the subsequent construction of different properties. This first stage was concluded in 1903. The same year, the fence that encloses the site and the area reserved for horse-drawn carriages were also finished.

With the outbreak of World War I in 1914, and after facing difficulties in the sale of the different properties, work was paralysed and abandoned entirely. At the time only 2 houses had been built, including that of Eusebi Güell, who moved to his dream park in 1907. The main difficulties surrounding the housing development were transport to the area and its exclusivity.
Although there were no residents, during these years Eusebi Güell did enable the celebration of festivals and civil events on the large square, which were generally welcomed by Eusebi and the rest of residents. 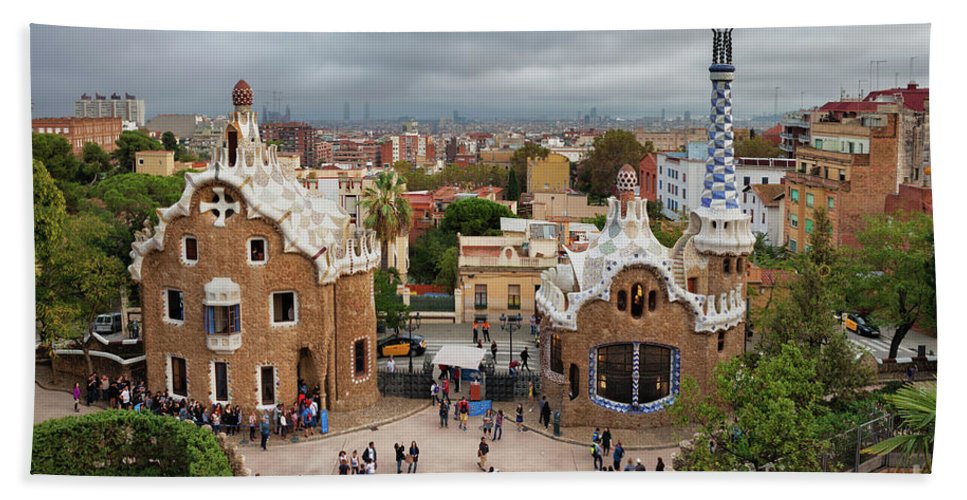 In the end, the project was unsuccessful. Despite this, the park entrances and service areas were built, displaying Gaudí's genius and putting into practice many of his innovative structural solutions.   Construction of the park was carried out during Gaudí’s naturalist stage, when he perfected his personal style, inspired by the organic forms of nature. One of his greatest works, Casa Batlló, is also an example of this stage.

Two model homes were built: one by architect Juli Battllevell and the other by Gaudí’s assistant, Fransesc Berenguer. Sadly, those were the only two houses built, and the failed housing development was transformed into an original public park in which there is not a single straight line.

Gaudí eventually moved with his niece into the house designed by his assistant. That house is now the Gaudí Museum (Casa Museu Gaudí), which can be visited today.

Eusebi died in 1918 and his heirs offered the park to Barcelona City Council, which agreed to the purchase in 1922. It was not opened as a municipal park until 1926 and it has since been the city’s most important and prominent park.

Description of the park

Gaudí designed the grounds, respecting the natural landscape, as well as the water collection and storing system, avoiding erosion issues caused by Mediterranean rainfalls.  Barcelona's Càrmel district is a rugged area, with steep slopes that Gaudí negotiated with a system of viaducts integrated into the terrain. 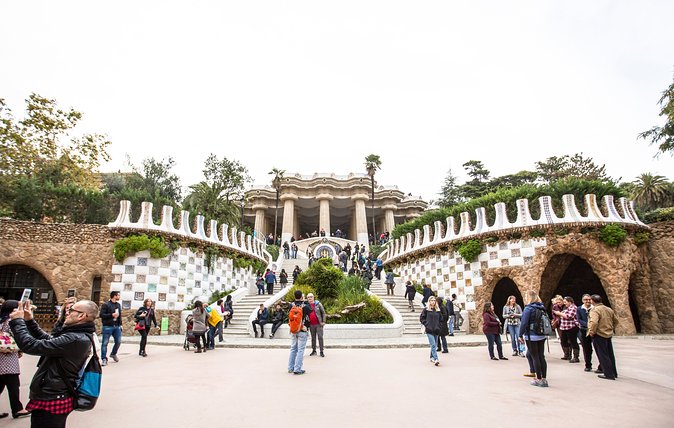 The main entrance to the park has a building on each side, intended as a porter's lodge and an office, and the site is surrounded by a stone and glazed-ceramic wall. These entrance buildings are an example of Gaudí at the height of his powers, with Catalan vaults that form a parabolic hyperboloid.

The famous Hypostyle Hall or Hall of a Hundred Columns was finished in 1907, inspired by the Greek town of Delphi, and it actually only has 86 columns.

Steps lead to the Hypostyle Hall, which was to have been the residents' market, constructed with large Doric columns.   Eusebi Güell was very interested in the Greek City of Delphi and in turn this influenced and persuaded Gaudi to create parts of the Greek site in some parts of the park, such as, for example, the Temple of Apollo represented in the Hall of the One Hundred Columns.  Above the Hall and this chamber is a large plaza in the form of a Greek theatre, with the famous undulating bench covered in broken ceramics ("trencadís"), the work of Josep Maria Jujol. 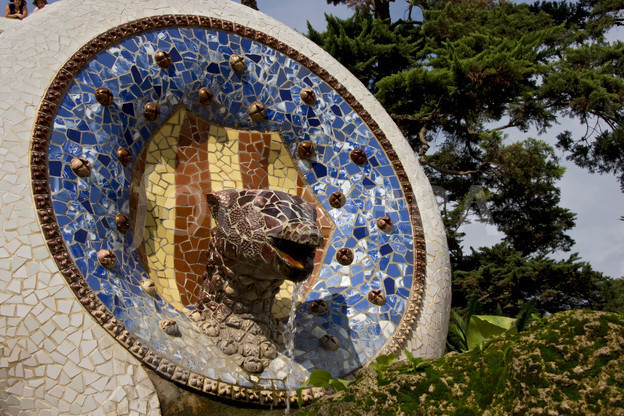 After passing through the gate, steps lead to higher levels, decorated with sculpted fountains, notably the dragon fountain, which has become a symbol of the park and one of Gaudí's most recognised emblems.  This park is one of the icons of Barcelona, a city that has over 400 dragons in allusion to the legend of Saint George (the patron saint of Catalonia). Of all these dragons, those in Park Güell are the most photographed and world-renowned.

The salamander in Park Güell has also become a symbol of Gaudí's work.  Salamanders are not symolically the same as dragons.  Salamanders are symbolically from the Element of Fire, and Gaudi’s salamander is protecting the steps of ascension.  The Fire level is usually thought of as the level of creativity – fire forging new creations. 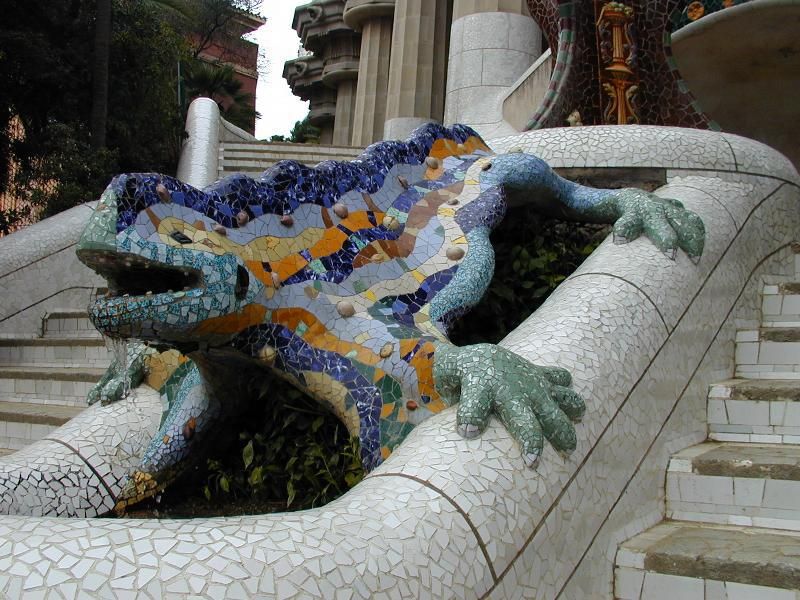 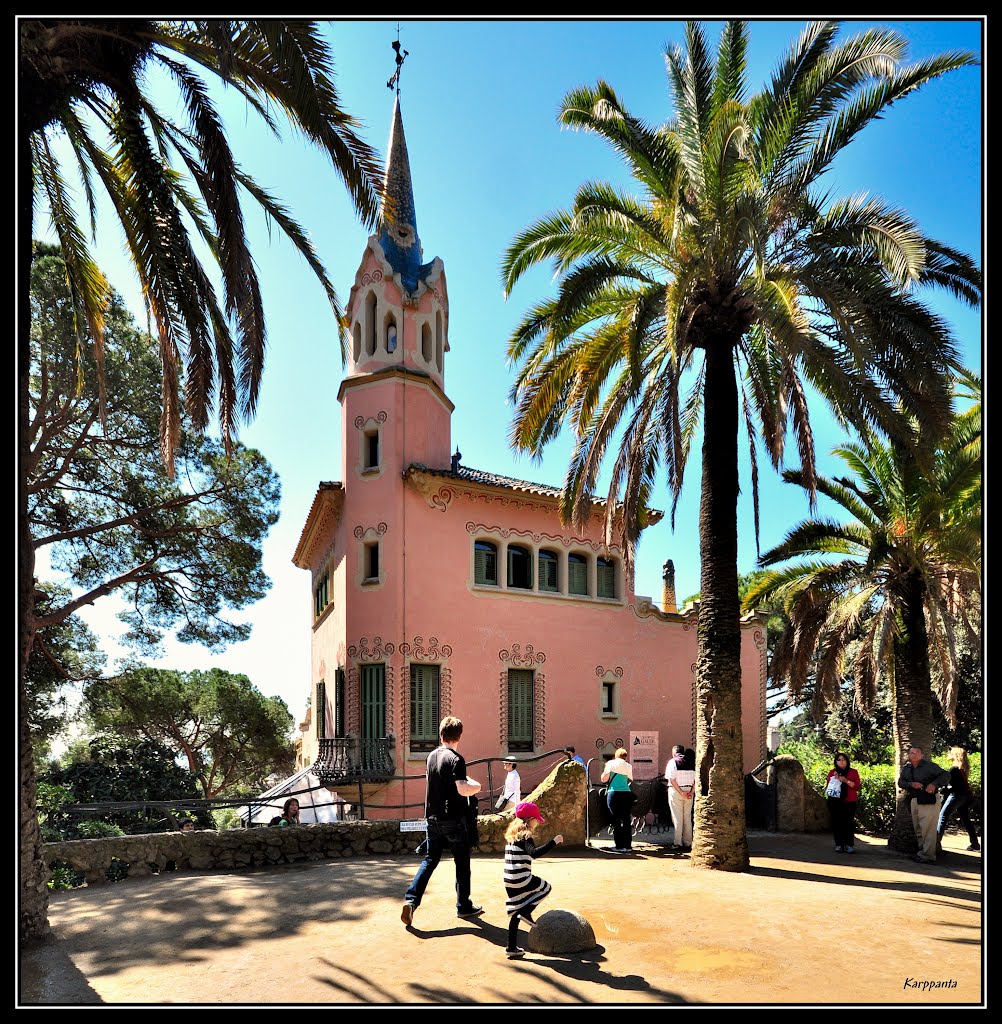 The park's show home, the work of Francesc Berenguer, was Gaudí's residence from 1906 to 1926, and currently houses the Casa-Museu Gaudí.

He lived in this house almost until his death in 1926, moving only a few months before his death, to the workshop of the Sagrada Família.