The Story of Eric

Everything that Eric has learned had to be broken down into small steps. When Eric was around 7 years old, I took him to Beavers (part of the Cubs Scouts/Brownies/Girl Guides organizations). My instinct was to try to socialize him within the community. Eric was a pilot project because none of the leaders knew anything about autism. Also, Eric had very few words and no give-and-take conversation. On one of our outings with the Beavers, we went to a wave pool with a big water slide. Eric kept on pulling at my leg and pointing to the water slide.... I did not know at the time that Eric could not "generalize" i.e. whatever happens to other people coming off the water slide will happen to him. I decided that with Eric’s interest still there after watching about 30 people going under water at the bottom of the water slide, that I could double ride with him, holding him up at the bottom of the slide. ...Well...we both went under water. All the way home, Eric kept repeating two brand new words "NOT FAIR !! NOT FAIR !!" The next day, Eric picked up a pencil and paper and started drawing water slides. Water slides have become one of Eric’s intense interests. He can draw them to photographic detail and quality. I figured out that with Eric’s intense interest in water slides, to take his interest and use it as a learning tool to grow and expand on. To this day, Eric’s love of water slide parks and amusement parks is so strong that he is taking courses at college so he can design and build them. 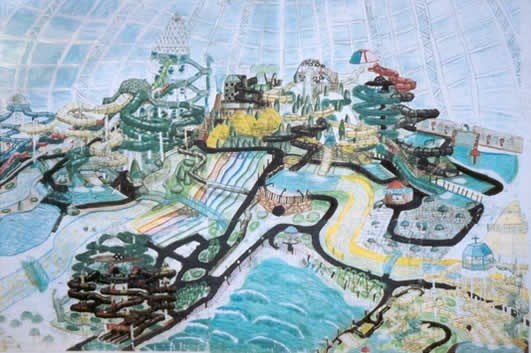 One of Eric’s unusual savant skills (he has 3 - art, math and music) that he started, he started playing the piano incredibly well, perfect pitch and ear all of a sudden. He had never had a lesson !!! He just sat down and played !!! He played piano (and now music keyboards) so he could describe his feelings about water slides through music. Eric can sit down and play any music he hears and likes within 5 minutes !!!

Six years ago, Eric could not understand or handle the world becoming more complex. The schools believed in (forced) integration i.e. "no choice" and that autistic children would become "normal" if they were around normal children.  The schools never had enough money for a teacher’s aid for Eric. In grade 6 & 7 Eric had to share a teacher’s aid with 6 other children throughout the school. The teachers did not have a clue about autism and I as a parent was not aloud to go in to help Eric. The teachers did not adapt what they taught i.e. more visuals, letting Eric use "point form", giving Eric copies of the notes, etc., etc. With all this happening my autistic son Eric became extremely aggressive, becoming a danger to himself and everyone around him. He would be sent home i.e. expelled from school at least once or twice a week, if not more because of "0 violence tolerance

the Children’s Aid Society found a placement for Eric with Bairn Croft Residential Services. Bairn Croft staff specialize in children and young adults who are on the ASD spectrum, or have any communication, developmental and/or social delay or disorder…... Under Bairn Crofts care and guidance over the last 6 years, Eric has flourished. He has learned "skills of daily living"; he is now living semi-independently, has graduated from the Precision Machining Technology Program at Algonquin College, plays bowling with Special Olympics, has a job, has a girl friend and has many friends. By the way, if these kids do make it through to college, Algonquin College makes any adaptations necessary for their "special needs students" to be successful. ........ They have been amazing with Eric

Through all this Eric has become fully verbal.

Autism, savantism and other forms of PDD