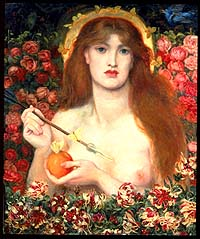 Very little is known about the Thesmophoria.  It was rare that women wrote down anything at this time and “the mysteries or initiation rites (teletai) surrounding restrictive religious ceremonies were jealously guarded by those who performed them”. The chief source is a scholiast on Lucian (Dialogue Meretricii 2.1), explaining the term "Thesmophoria" and he was a man.

The Thesmophoria was not restricted to Eleusis, the festival was held in a number of Greek cities but all were based on the Demeter and Persephone/Kore story.  No men could attend and husbands were expected to send their wives and meet the festival's costs.  They could expect to be severely treated if they attempted to spy on the proceedings.

“The ceremony was supposed to promote fertility, but the women prepared for it with sexual abstinence”.

There is mention in the ritual descriptions of snakes, which means the event was likely to have been specifically designed to provoke a kundalini experience.  Furthermore, the initiates ate meat after the event but fasted beforehand.  Fasting helps promote a spiritual experience, meat – particulalry red meat – helps ‘ground’ you afterwards, it is a well know shamanic process.

In the following description, the girl was to be made an initiate in the Thesmophoria and this is why he had to pay so much and why she had to undergo over nine months of preparation.  As we will see when we get to the description of what happened, this also involved quite some sacrifice on the young man’s part – a sign of real love………….. 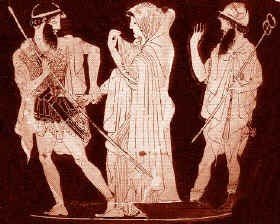 We are told that there once was a young Athenian who was much taken with the beauty of a courtesan in one of the brothels of Corinth. His attempts to repay her favors in some special way were continually frustrated by the madam, who insisted upon confiscating all private gifts. To give the girl something that would be hers alone, he hit upon the idea of offering her an immaterial, and thereby inalienable, benefit: he would pay the expenses for her introduction into the … the secret religious ceremony practiced at the village of Eleusis.

This was generally considered the culminating experience of a lifetime. And so she was allowed to travel to Athens, together with the madam and a younger girl from the brothel. The lover lodged them all with a friend while they prepared themselves by the preliminary rites. The full sequence would require more than half a year’s residence in Athens.