There is a wonderfully touching story about Dürer's Praying Hands that is circulated widely. The story is repeated below.  The only problem is, the study isn't called that, as you can see below.

Dr. Diana Severance, a researcher into Durer, even visited Dürer's house, now a museum, in Nuremberg, to ask the source of the story, and they had no idea.

But it is still a nice story, so we have included it. 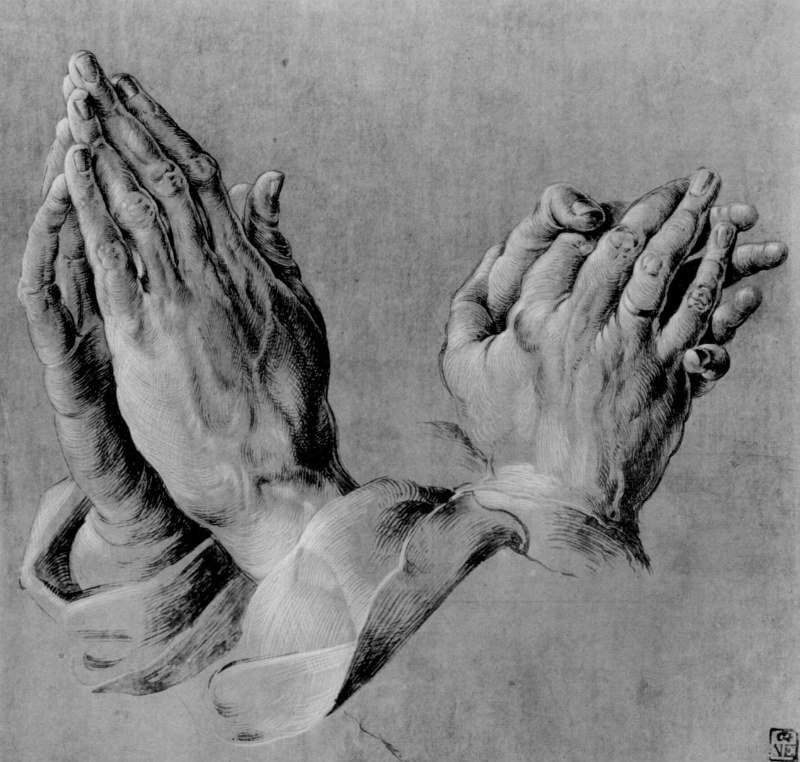 Paul Westmerland - The legend of the praying hands

Back in the fifteenth century, in a tiny village near Nuremberg, lived a family with eighteen children. Eighteen! In order merely to keep food on the table for this big family, the father and head of the household, a goldsmith by profession, worked almost eighteen hours a day at his trade and any other paying chore he could find in the neighbourhood.

Despite their seemingly hopeless condition, two of Albrecht Durer the Elder's children had a dream. They both wanted to pursue their talent for art, but they knew full well that their father would never be financially able to send either of them to Nuremberg to study at the Academy.

After many long discussions at night in their crowded bed, the two boys finally worked out a pact. They would toss a coin. The loser would go down into the nearby mines and, with his earnings, support his brother while he attended the academy. Then, when that brother who won the toss completed his studies, in four years, he would support the other brother at the academy, either with sales of his artwork or, if necessary, also by labouring in the mines.

They tossed a coin on a Sunday morning after church. Albrecht Durer won the toss and went off to Nuremberg.

Albert went down into the dangerous mines and, for the next four years, financed his brother, whose work at the academy was almost an immediate sensation. Albrecht's etchings, his woodcuts, and his oils were far better than those of most of his professors, and by the time he graduated, he was beginning to earn considerable fees for his commissioned works.

When the young artist returned to his village, the Durer family held a festive dinner on their lawn to celebrate Albrecht's triumphant homecoming. After a long and memorable meal, punctuated with music and laughter, Albrecht rose from his honoured position at the head of the table to drink a toast to his beloved brother for the years of sacrifice that had enabled Albrecht to fulfil his ambition. His closing words were, "And now, Albert, blessed brother of mine, now it is your turn. Now you can go to Nuremberg to pursue your dream, and I will take care of you."

All heads turned in eager expectation to the far end of the table where Albert sat, tears streaming down his pale face, shaking his lowered head from side to side while he sobbed and repeated, over and over, "No ...no ...no ...no."

Finally, Albert rose and wiped the tears from his cheeks. He glanced down the long table at the faces he loved, and then, holding his hands close to his right cheek, he said softly, "No, brother. I cannot go to Nuremberg. It is too late for me. Look ... look what four years in the mines have done to my hands! The bones in every finger have been smashed at least once, and lately I have been suffering from arthritis so badly in my right hand that I cannot even hold a glass to return your toast, much less make delicate lines on parchment or canvas with a pen or a brush. No, brother ... for me it is too late."

More than 450 years have passed. By now, Albrecht Durer's hundreds of masterful portraits, pen and silver point sketches, water-colours, charcoals, woodcuts, and copper engravings hang in every great museum in the world, but the odds are great that you, like most people, are familiar with only one of Albrecht Durer's works. More than merely being familiar with it, you very well may have a reproduction hanging in your home or office.

One day, to pay homage to Albert for all that he had sacrificed, Albrecht Durer painstakingly drew his brother's abused hands with palms together and thin fingers stretched skyward. He called his powerful drawing simply "Hands," but the entire world almost immediately opened their hearts to his great masterpiece and renamed his tribute of love "The Praying Hands."

The next time you see a copy of that touching creation, take a second look. Let it be your reminder, if you still need one, that no one - no one - ever makes it alone!