Day at the beach

A Day at the Beach

My name is Sandra Braithwaite and I live by the sea
I’m rather fond of sex and fags and anything that’s free
I must admit I’m flighty, but so far I’ve not been caught
Because my husband doesn’t notice, he never was that sort

I decided to go sunbathing one bright and sunny day
Our beach is close, the sun was hot, just right I hear you say
And right it was ‘cos on the beach I saw to my delight
A football team were practising, just within my sight

Their legs were strong, their muscles bronzed, my God did they look fit
I thought I bet if I play right, they’ll all be up for it
And so I quickly removed my bra, to show my ample breasts
And lay with legs slightly apart to show which bit’s my best

Well readers you will not believe, they all were up for sport
And I had every one of them and the ref and coach (who fought)
I had them by the bandstand and I had them by the sea
On beach, on deckchairs, by the prom - an epic you’ll agree

I had them till I tottered, exhausted by the pleas
Though I was rather pleased to notice that the team were on their knees
And one of them was a stretcher case, but I’m rather glad to say
That he’s doing nicely in his ward and’ll be out within a day

So putting back my underclothes I waved the team goodbye
They all agreed for exercise this was the best they’d tried
I said I’d come tomorrow if they wanted another go
But to a man, you won’t believe, they all said ‘thank you, no’ 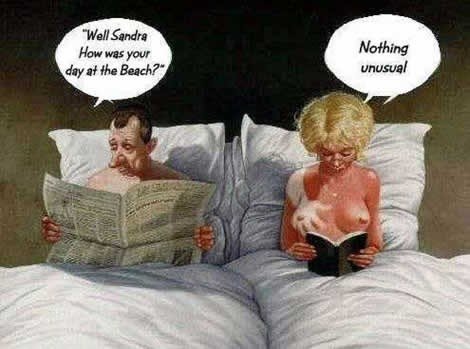