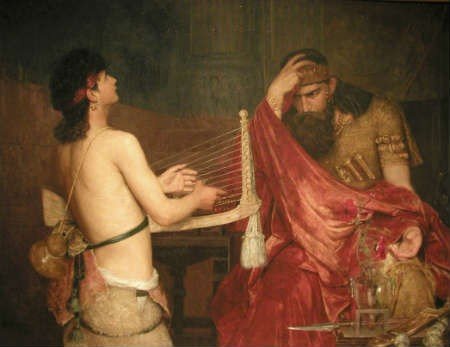 14But the Spirit of the LORD departed from Saul, and an evil spirit from the LORD troubled him.

15And Saul's servants said unto him, Behold now, an evil spirit from God troubleth thee.

16Let our lord now command thy servants, which are before thee, to seek out a man, who is a cunning player on an harp: and it shall come to pass, when the evil spirit from God is upon thee, that he shall play with his hand, and thou shalt be well.

17And Saul said unto his servants, Provide me now a man that can play well, and bring him to me.

18Then answered one of the servants, and said, Behold, I have seen a son of Jesse the Bethlehemite, that is cunning in playing, and a mighty valiant man, and a man of war, and prudent in matters, and a comely person, and the LORD is with him.

19Wherefore Saul sent messengers unto Jesse, and said, Send me David thy son, which is with the sheep.

20And Jesse took an ass laden with bread, and a bottle of wine, and a kid, and sent them by David his son unto Saul.

21And David came to Saul, and stood before him: and he loved him greatly; and he became his armour bearer.

22And Saul sent to Jesse, saying, Let David, I pray thee, stand before me; for he hath found favour in my sight.

23And it came to pass, when the evil spirit from God was upon Saul, that David took an harp, and played with his hand: so Saul was refreshed, and was well, and the evil spirit departed from him.