We are apt to think that raves are something new, but you may be surprised – read on………… 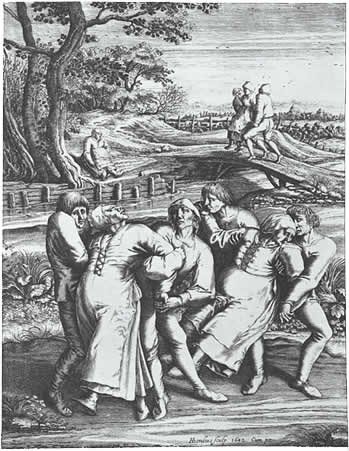 Dancing mania on a pilgrimage to the church at Sint-Jans-Molenbeek.
An engraving by Hendrick Hondius (1642) after a drawing by
Pieter Brueghel the Elder (1564).

Dancing mania occurred primarily in mainland Europe between the 14th and 17th centuries.  It involved groups of people, sometimes thousands at a time, who danced uncontrollably and bizarrely.  They would scream, shout, and sing, and have visions or hallucinations.  The mania affected men, women, and children, who ‘danced until they collapsed from exhaustion’.

The dancing was rather interestingly treated as a disease and both causes and cures were sought – all to no avail.  One of the first major ‘outbreaks’ was in Aachen, Germany, in 1374, and it quickly spread throughout Europe; one particularly notable ‘outbreak’ occurred in Strasbourg in 1518.  Affecting thousands of people across several centuries, dancing mania was not a one-off event, and was well documented in contemporary reports.

“The several theories proposed range from religious cults being behind the processions to people dancing to relieve themselves of stress and put the poverty of the period out of their minds. It is, however, understood as a mass psychogenic illness[sic]  in which the occurrence of similar physical symptoms, with no known physical cause, affect a large group of people as a form of social influence”

The following is truly comical but interesting……….

Whether the dancing was spontaneous, or an organised event, is debated. What is certain, however, is that dancers seemed to be in a state of unconsciousness, and unable to control themselves. In his research into social phenomena, author Robert Bartholomew notes that contemporary sources record that participants often did not reside where the dancing took place. Such people would travel from place to place, and others would join them along the way. Bartholomew notes that some "paraded around naked" and made "obscene gestures". Some even had sexual intercourse [sic!]. Others jumped, hopped and leaped about  Throughout, dancers screamed, laughed, or cried, and some sang.  Bartholomew notes that dancers ‘ suffered from a variety of ailments, including chest pains, convulsions, hallucinations, hyperventilation, epileptic fits, and visions [ my note:  sincewhen has a vison been an ailment?] In the end, most simply dropped down, overwhelmed with exhaustion.  Midelfort, however, describes how some ended up in a state of ecstasy.

The effects – visions, talking in tongues, healing and so on – were regarded by the participants at least as the blessings of saints such as St Vitus and it is from "St Vitus' Dance" or "St John's Dance" [after John the Baptist] that we get the name for Sydenham’s chorea or St Vitus dance, which apparently shares much of the same movements [see illnesses and diseases for a description]

We are apt to think that rave dancing and other such dances are new, but this frenetic form of dancing was in operation as far back as the 7th century and disappeared and reappeared many times across Europe until about the 17th century, when it stopped abruptly.  The waves of disappearance appear to coincide with crackdowns by the institutionalised church – clearly spiritual experience engendered outside the confines of the Church threatened the power and control of this institution, so there was a constant battle going on between those who wanted to dance and ‘get high’ and those in the church who didn’t want them to.

It is fairly clear from the descriptions, that the participants were none too enamoured of the Church and its rigid controls.  One of the earliest known incidents occurred sometime in the 1020s in Bernburg, where 18 peasants began singing and dancing around a church, disturbing a Christmas Eve service.

In 1237,  a large group of children travelled from Erfurt to Arnstadt, jumping and dancing all the way.  In 1278, 200 people dancing on a bridge over the River Meuse in Germany, resulting in its collapse. In 1373 and 1374, many more incidents were reported in England, Germany and the Netherlands  On 24 June 1374, one of the biggest dancing raves began in Aix-la-Chapelle, before spreading to other places such as Cologne, Flanders, Franconia, Hainaut, Metz, Strasbourg, Tongeren, Utrecht and to countries such as Italy and Luxemburg. Further episodes occurred in 1375 and 1376, with incidents in France, Germany and Holland.

Another large ‘rave’ occurred in July 1518, in Strasbourg, where a woman named Frau Troffea began dancing in the street; within four days she had been joined by 33 others, and within a month there were 400.

Again, the following is comical but quite enlightening, because it shows that the authorities recognised the value and the pleasure that such dancing brought, it was only the church who condemned the activity and treated it as a plague or a disease………

As the dancing plague worsened, concerned nobles sought the advice of local physicians, who ruled out astrological and supernatural causes, instead announcing that the plague was a "natural disease" caused by "hot blood." However, instead of prescribing bleeding, authorities encouraged more dancing in part by opening two guildhalls and a grain market, and even constructing a wooden stage! The authorities indicated that they thought the dancers would only recover if they danced continuously night and day. To increase the effectiveness of the cure, authorities even paid for musicians to keep the afflicted moving.

I can think of quite a number of rave events where it would have been really nice if the local council had provided a guild hall or a grain market to dance in.  It would appear the authorities in those days were more broad minded and understanding than they are today.  By the tone of this modern article, the protestant moralising hasn’t left us either.

Professor of medicine Gregor Horst
Several women who annually visit the chapel of St. Vitus in Drefelhausen... dance madly all day and all night until they collapse in ecstasy. In this way they come to themselves again and feel little or nothing until the next May, when they are again... forced around St. Vitus' Day to betake themselves to that place... [o]ne of these women is said to have danced every year for the past twenty years, another for a full thirty-two.

Further incidents occurred during the 16th century.  It is interesting to note that the 16th century saw this phenomenon at its peak after which it went into sharp decline  – it can be no coincidence that the Protestant Reformation initiated by Martin Luther, John Calvin and other early Protestants occurred at the same time. As the text books say

Alternatively it was killed off. 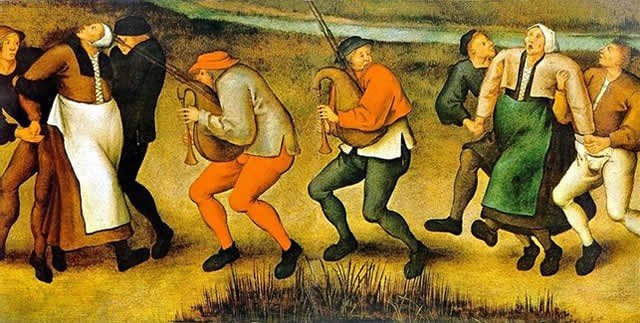 Dance at Molenbeek - A painting by Pieter Brueghel the Younger, after drawings by his father