Those who have seen the old Traditional Card--The Angel or Last Judgment--know that the Thoth Deck Card seems to stray from tradition; However, Crowley states otherwise and says, "...it was necessary to depart completely from the tradition of the cards, in order to carry on that tradition."

The Aeon of Osiris ended in 1904 when the Solar-Fiery god Horus took over the position of Hierophant in the East, from the Airy god Osiris. Therefore, Crowley rightly thought that the new card should be a representation of the "Stele of Revealing".

The artist of the Thoth Cards, Lady Freda Harris, produced a card of magnificent detail, showing the Star filled body of Goddess Nut; her mate is represented as a winged globe of fire.

The resulting marriage of these two produces the child Horus (Heru-ra-ha), shown in the images of a double god; his extroverted (standing) image represents Ra--hoor-khuit and his passive or introverted sitting image represents Honor-pa-kraat.(you'll have to look these up in Egyptian myth for further explanation). Horus, being a solar entity, is also shown coming forth in golden light. The whole of the explanation of the Aeon card is in Crowley's Book of Law.

At the bottom -right of the Aeon card and at the top-left of the Night Sun Tarot card, we see the Hebrew letter Shin, suggesting the form of a flower. As stated: On the Thoth Tarot- the three Yods (leaf or petal like ends) of the letter Shin are occupied by three human figures (the three arising from graves on the Old Card) arising to partake of the Essence of the new Aeon. Behind the letter Shin, is a symbolic representation of the zodiacal sign, Libra; Crowley called this "... the forth-shadowing of the Aeon which is to follow the present one……."

In the Book of Law, Crowley depicts Ra-hoor-khuit; as stating,"I am the Lord of the Double Wand of Power; the Wand of Force of Coph Nia; but my left hand is empty, for I have crushed a Universe;& naught remains." Not much more about the future Aeon is shown on this card, as Crowley felt the present Aeon is too young to show more. Crowley points out that Horus has another name which is Heru and that is synonymous with Hru which is "The Great Angel set over the Tarot."

In summary
Crowley knew that the system of Tarot evolves to meet the spiritual needs of the races and of that the individual Personality or Self-Consciousness. Therefore he suggest that over time the Spiritual make-up; the Gnosis of mankind, will have so advanced that what was previously known as JUDGMENT, will be inadequate to describe the experience of The Aeon/ the Path of Shin . This meets with his assertion that we are now passing through a five hundred year period of extreme darkness and trial, preparatory to a New Aeon of Light. 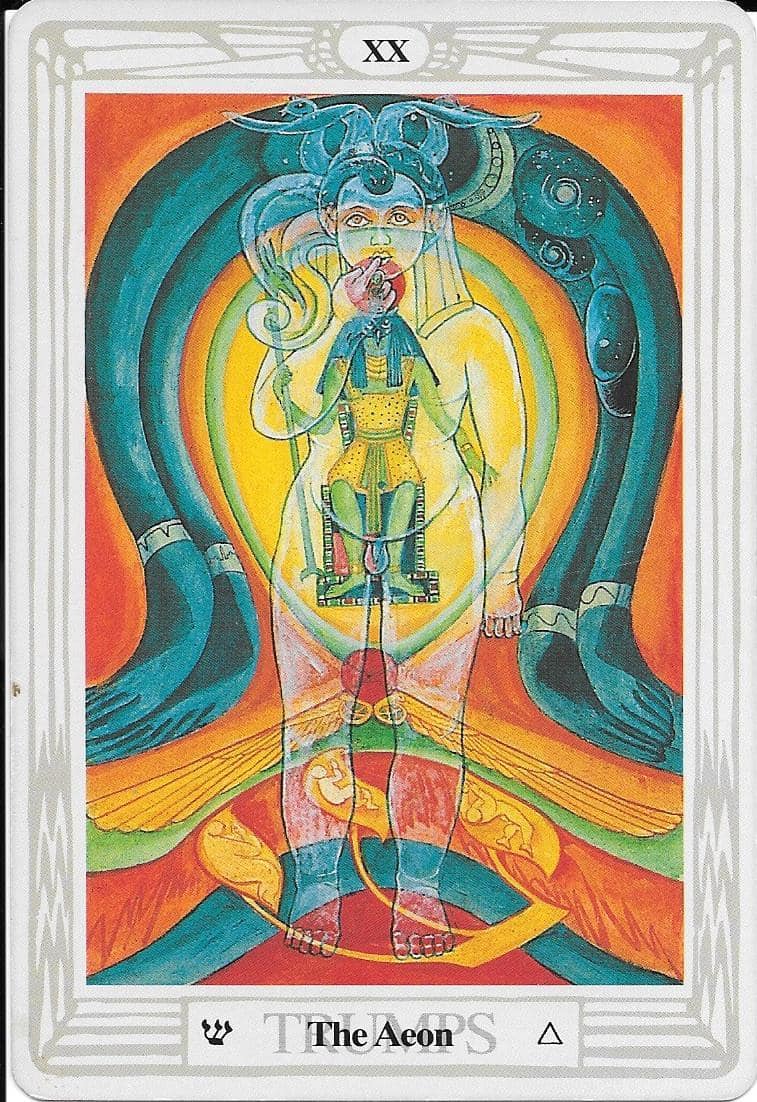 Ages of Man
Configuration
Great Work, the
Increments of evolution