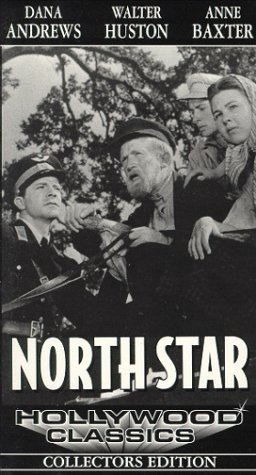 Aaron Copland : The North Star, Suite from the film music (1943)

The North Star (also known as Armored Attack in the US) is a 1943 war film produced by Samuel Goldwyn Productions and distributed by RKO Radio Pictures. It was directed by Lewis Milestone, written by Lillian Hellman and featured production design by William Cameron Menzies. The film starred Anne Baxter, Dana Andrews, Walter Huston, Walter Brennan and Erich von Stroheim. The music was written by Aaron Copland, the lyrics by Ira Gershwin, and the cinematography was by James Wong Howe. The film also marked the debut of Farley Granger.

The film is about the resistance of Ukrainian villagers, through guerrilla tactics, against the German invaders of the Ukrainian SSR.

The film was nominated for six Academy Awards:

In June 1941 Ukrainian villagers are living in peace. As the school year ends, a group of friends decide to travel to Kiev for a holiday. To their horror, they find themselves attacked by German aircraft, part of the Nazi invasion of the Soviet Union. Eventually their village itself is occupied by the Nazis. Meanwhile, men and women take to the hills to form partisan militias.

The full brutality of the Nazis is revealed when a German doctor (Erich von Stroheim) uses the village children as a source of blood for transfusions into wounded German soldiers. Some children lose so much blood that they die.

A famous Russian doctor (Walter Huston) discovers this and informs the partisans, who prepare to strike back. They launch a cavalry assault on the village to rescue the children. The Russian doctor accuses the German doctor of being worse than the convinced Nazis, because he has used his skills to support them. He then shoots him.

The peasants join together, and one girl envisions a future in which they will "make a free world for all men".