This is quite helpful, it comes from a site about Chichen Itza written by historians

"One of the most famous ancient statues throughout Mexico is the "Chac Mool." Since the discovery of the first one at Chichen Itza in the 19th century, there has been little agreement among the archaeological and historical community exactly what the statue represents or what its purpose might have been.
The unique posture of the statue--a figure on its back or side, legs drawn up, resting upon its elbows and holding a platter or bowl or tray--appears throughout Mesoamerica. The most famous statue of this type was excavated by Augustus Le Plongeon at Chichen Itza in 1873. Le Plongeon named it Chaacmol, which he said was Maya for "the paw swift like thunder."
Le Plongeon did not name the statue because in his mind, the statue already had one. Chaacmol, he said, was the name of the Maya's greatest warrior, and that man's visage was the one on the statue.

Le Plongeon's patron, Stephen Salisbury, published the statue's discovery in the journal of the American Antiquarian Society. Salisbury changed the name of the statue to "Chac-Mool," "in deference to prevailing usage in Yucatan," he wrote. Apparently Salisbury also changed the meaning of the name, as chac mool in Maya means "red jaguar."
The new name stuck, not only on the specific statue, but on all statues of that type. It turned out that other versions had been found throughout Mesoamerica. The first published account of such a statue appeared in 1832.
The Chac Mool does not appear to be of Maya origin. Fewer are found in the Maya regions (exclusive of Chichen Itza) than in central Mexico. However, the form has been found as far south as El Salvador.
At Chichen Itza, more than three dozen of the statues have identified. The most well known is the original found by Le Plongeon, which is now in the national museum in Mexico City (above); another is at the top of the Temple of Warriors; and the one found inside the original pyramid under El Castillo ."

Now the meaning as I understand it.  The first meaning may be simply that it is a representative guardian.  But it may also be a signpost as well indicating thta this was the actual temple of Initiation, where the Intitiates were 'flailed' to get the kundalini energy to rise.

You need to follow the link I have provided to the common steps to see why. 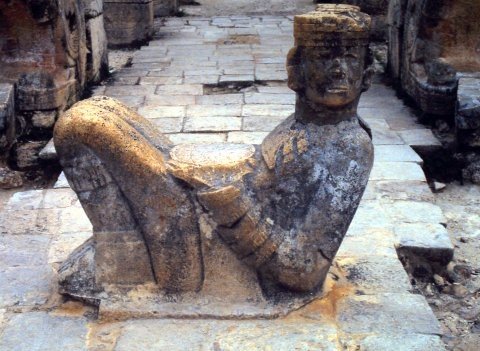 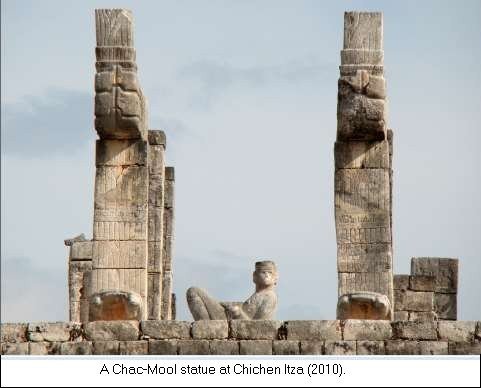