from Mysteries of the Pygmy Flints, a blog from December 9, 2013 by Sara Marie Hogg

Jeremy observed his grandfather going over several computer print-outs at his desk positioned in front of a well-loaded bookcase. On the shelves above the desk was a row of books and file folders that had always intrigued Jeremy. They were somewhat mysterious, he thought. His grandfather never talked much to him about this hobby. It consumed him.

The titles on some of the books were things like: Charles Fort’s Book of the Damned, Mysteries of Mind, Space and Time, Mysteries of the Unexplained, Indian Antiquary, Huddersfield One-Tolson Museum Booklets-Early Man, and essays such as “Pygmy Flints in the Dee Valley,” “Traverse Arrowheads From Northern Europe,” “Flint Implements of the Bronze Age” and the ever enticing “Proceedings of the Cotteswold Naturalists’ Field Club.”

Jeremy waited a moment, then, asked again. “What are you studying, Grandfather?”

“I am studying what I am usually studying, pygmy flints. I suspect you are old enough to be clued in on them, without going off on a wild tangent. Your mother shall throttle me if I get you all worked-up over these mysterious artifacts. I don’t expect I could count on you to remain mum, and not discuss it, could I?”

“Oh, yes, Grandfather. You have my word. I shall keep mum!”

Jeremy’s grandfather then proceeded to show him page after page of the artifacts known in archaeological circles as pygmy flints: minute chipped flints in the shape of borers, scrapers, knives and axe heads. Then Jeremy’s grandfather asked him to read a quote by British antiquarian Reginald A. Gatty. The boy bore down on the page: “…when you get down to minute sizes, to little well-formed flints less than a quarter of an inch (six millimeters), you need a magnifying glass to discover the workmanship.

What hands, what eyes, these prehistoric flint makers must have had to frame such delicate tools! ….when seen together, row after row, you realize that these flints were fabricated with a design and purpose and whoever the people were who made them, dwarves or fairies, they certainly were handicraftsmen of no mean order.”

With that, Jeremy Bratewaithe was content to spend the rest of the afternoon, and many more to come, sitting alongside his grandfather at his desk in the study of pygmy flints, when no one else was watching, that is.

Pygmy flints have been found in Britain, southern Africa, Australia and India—thousands of them. As far as we know, no pygmies ever lived in ancient Britain. There is no proof of the existence of fairies, either. Often tiny pottery artifacts are found nearby—pots, plates and urns. There are many who believe some of these flints were points for bird-hunting arrows (what of the axe heads?). Others believed they were made as toys for ancient children. Yet, there is that disarming question: who had hands so tiny that they could execute the remarkable craftsmanship required for making these wee tools. Normal hands are much too large. Ancient people did not have magnifying glasses, and children did not have the skill. Who could it possibly be?

The Book of the Damned - Charles Fort

We now come to some "cursed" little things that are of the "lost," but for the "salvation" of which scientific missionaries have done their damnedest. "Pigmy flints."  "Pigmy flints" are tiny, prehistoric implements. Some of them are a quarter of an inch in size. England, India, France, South Africa--they've been found in many parts of the world.

Rept. National Museum, 1892-455
The datum that, just at present, leads me to accept that these flints were made by beings about the size of pickles, is a point brought out by Prof. Wilson:  Not only that the flints are tiny but that the chipping upon them is  "minute."

Science Gossip, 1896-36,
R.A. Galty says:  "So fine is the chipping that to see the workmanship a magnifying glass is necessary." 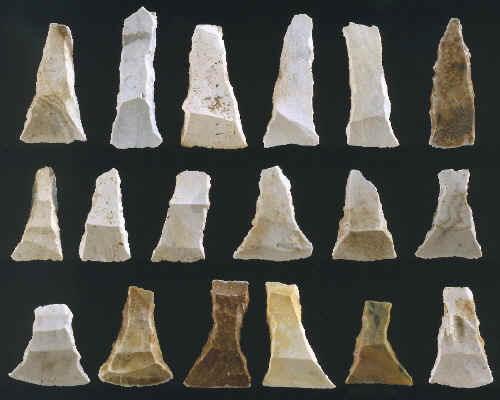