From Book of the Damned

Cup marks are strings of cup-like impressions in rocks. Sometimes there are rings around them, and sometimes they have only semi-circles.

Great Britain, America, France, Algeria, Circassia, Palestine: they're virtually everywhere--except in the far north, I think. In China, cliffs are dotted with them. Upon a cliff near Lake Como, there is a maze of these markings. In Italy and Spain and India they occur in enormous numbers.

"Whatever may have been their motive, the cup-markers showed a decided liking for arranging their sculpturings in regularly spaced rows." 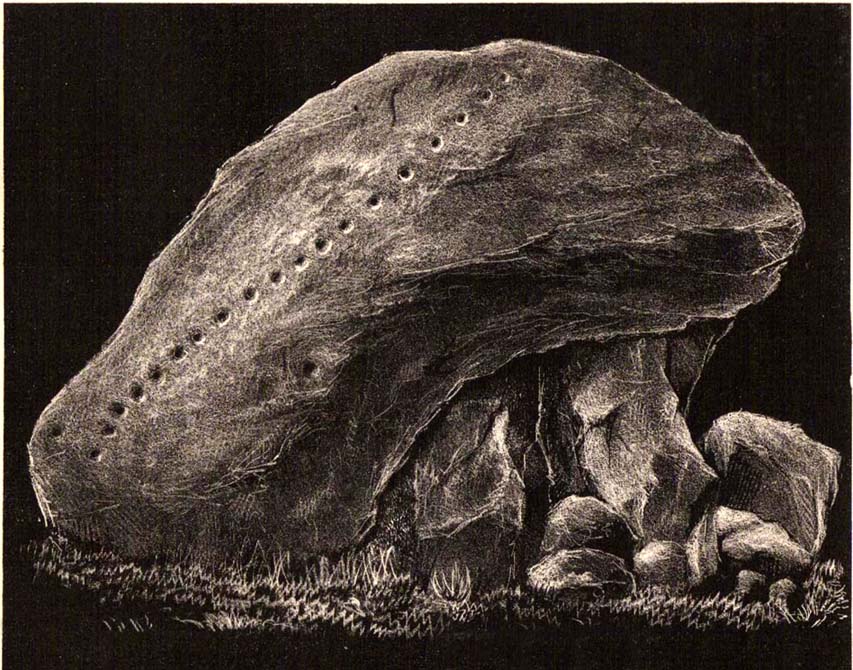 Upon the Witch's Stone, near Ratho, Scotland, there are twenty-four cups, varying in size from one and a half to three inches in diameter, arranged in approximately straight lines. …..Similar marks are scattered bewilderingly all around the Witch's Stone--like a frenzy of telegraphing, or like messages repeating and repeating, trying to localize differently.

In Inverness-shire, cup marks are called "fairies' footmarks." At Valna's church, Norway, and St. Peter's, Ambleteuse, there are such marks, …... The rocks of Clare, Ireland, are marked with prints supposed to have been made by a mythical cow (Folklore, 21-184)………….

We now have such a ghost of a thing that I'd not like to be interpreted as offering it as a datum: it simply illustrates what I mean by the notion of symbols, like cups, …, which… are the reverse of, or the negatives of, cups—of symbols that are regularly received somewhere upon this earth--steep, conical hills…………..