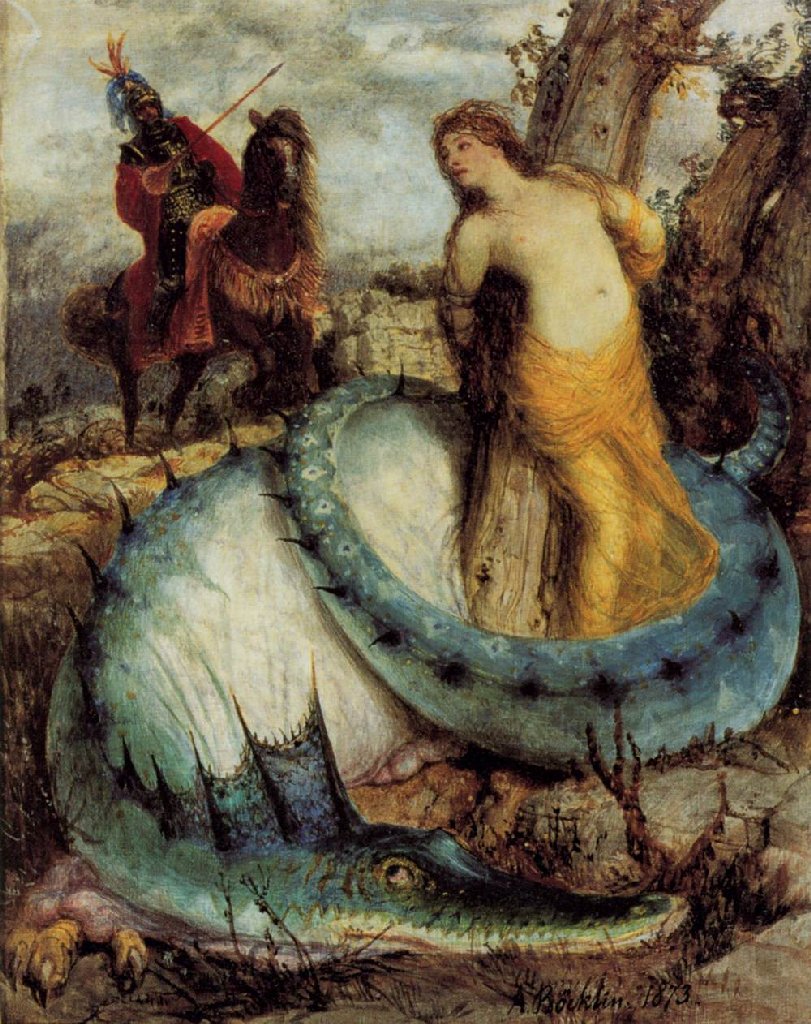 Around 1874 Böcklin completed a painting entitled Roger and Angelica.  It can now be seen in the Nationalgalerie in Berlin.  At this time, Böcklin was still young and fired with mythological themes and the idealism of promoting the old Apollonian/Dionysian ideals via art.

The scene is of Roger rescuing Angelique.  Ingres also painted the same theme and called his painting Roger delivering Angélique.

The painting depicts the main character, Roger, a knight, coming to the rescue of Angelique, who appears to be tied to a tree and [in the story on which this is based] is guarded by a sea monster, the giant turquoise orc, which has wrapped itself around the ‘helpless Angelique’.  In the background we see Roger arriving astride his horse.

There is more to the story, but even in this painting there are hints that even at this time Böcklin wasn’t entirely sure that Angélique wanted to be rescued.  The dragon is neither fierce nor particularly ferocious looking, he is a sort of ouroboros of a dragon protecting the celestial pole [the tree] to which Angelique looks like she is clinging for safety rather than having really been tied there.  She looks very apprehensive.

What is the knight bringing to the table, so to speak.  Is he a knight at all or just a man dressed to look like a knight?

Angelique is almost naked – nakedness being an indication of spirituality and a symbol of Light as opposed to Darkness.  Roger is dressed entirely in black – he is a symbol of Darkness.  She has every reason to fear.

In effect, Böcklin has already started to recognise the dangers inherent in this so called Age of Enlightenment, with science gradually replacing religion as a religion, with materialism, loss of the connection with the spiritual.

The ouroboros dragon in Böcklin’s painting is also very apprehensive; to a large extent Böcklin has subverted the story and thus the meaning of the painting – turned it on its head.

The dragon is the good guy, protecting the spiritual from the new wave of materialism in the false armour of Roger who will end up proving to be no knight at all.