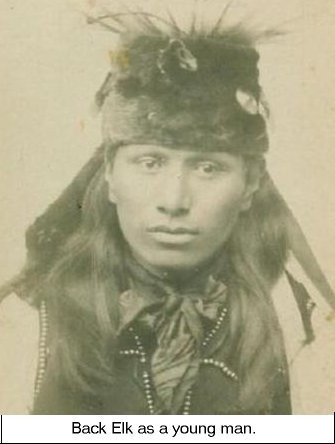 As we sat there, I looked up at the roof and it seemed to be moving.  The house was going around up at the top, and stretching upward as it went around.  I could see that we were all rising fast with the whole house, and it was turning around as it ‘rose’, and suddenly I was on it and the other people and the house were falling back away from me.  Then I was alone on this cloud, and it was going fast.  I clung to it hard, because I was afraid I might fall off.

Far down below I could see houses and towns and green land and streams, and it all looked flat.  Then I was right over the big water.  I was not afraid anymore, because, by now I knew I was going home.  It was dark, and then it was light again, and I could see a big town below me, and I knew it was the one where we first got on the big fire boat, and that I was in my own country again.  I was very happy now.  The cloud and I kept on going very fast, and I could see towns and streams and towns and green land.  Then I began to recognise the country below me.  I saw the Missouri River.  Then I saw far off the Black Hills and the centre of the world where the spirits had taken me in my great vision.  Then I was right over Pine Ridge, and the cloud stopped.

I looked down and could not understand what I saw, because it seemed that nearly all of my people of the different bands were gathered together there in a big camp.  I saw my father and mother’s tepee.  They were outside and she was cooking.  I wanted to jump off the cloud and be with them, but I was afraid it would kill me.  While I was looking down, my mother looked up, and I felt sure she saw me.  But just then the cloud started back, going very fast.  I was very sad, but I could not get off.  There were streams and green land and towns going backward very fast below me.  Soon the cloud and I were going right over the very big town again.  Then there was only water under me, and the night came without stars; and I was all alone in a black world and I was crying.  But after a while some light began to peep in far ahead of me.  Then I saw earth beneath me and towns and green land and houses all flying backwards.  Soon the cloud stopped over a big town, and a house began coming up towards me, turning around and around as it came.  When it touched the cloud, it caught me and began to drop down, turning around and around with me.

It touched ground, and as it touched I heard the girl’s voice, and then other voices of frightened people.  Then I was lying on my back in bed and the girl and her father and her mother and her two sisters and a doctor were looking at me in a queer way, as though they were frightened.  The English talker came from the show and he told me how it was.  While I was at breakfast, they said I had looked up and smiled, and then I had fallen like dead out of my chair.  I had been dead three days, except that once in a while I would breathe just a little.  Often they said they could not feel my heart at all.  They were sure I would soon be really dead and they were getting ready to buy my coffin….