"Ain't No Sunshine" is a song by Bill Withers from his 1971 album Just As I Am, produced by Booker T. Jones.

Withers was inspired to write this song after watching the 1962 movie Days of Wine and Roses. He explained, in reference to the characters played by Lee Remick and Jack Lemmon,
"They were both alcoholics who were alternately weak and strong. It's like going back for seconds on rat poison. Sometimes you miss things that weren't particularly good for you. It's just something that crossed my mind from watching that movie, and probably something else that happened in my life that I'm not aware of."

Except that I think he was.  Withers was born the youngest of six children in the small coal-mining town of Slab Fork, West Virginia. He was raised in nearby Beckley, West Virginia.  When he was thirteen years old his father died.  Life cannot have been at all easy for him or his family as a result, bringing up 6 children with no income earner is no joke.  Withers enlisted with the United States Navy at the age of eighteen as a means of obtaining a regular income and served for nine years, he remained worried about insecurity and the fickleness of the music industry throughout his career.  When he debuted with the song "Ain't No Sunshine" he refused to resign his job because of his belief that the music business was no place to get a steady income.

The combination of insecurity and worry however, produced a masterpiece.  Withers, then thirty-one years old, was working at a factory making toilet seats for 747s at the time.

The record featured musicians Donald "Duck" Dunn on bass guitar, Al Jackson, Jr. on drums, Stephen Stills on guitar and Bill Withers on vocals. String arrangements were done by Booker T. Jones, and recorded in Memphis by engineer Terry Manning. The song was released as a single in September 1971, becoming a breakthrough hit for Withers, reaching number six on the U.S. R&B chart and number three on the Billboard Hot 100 chart.

The song is in natural minor.

For the song's third verse, Withers had intended to write more lyrics instead of repeating the phrase "I know" 26 times, but then followed the advice of the other musicians to leave it that way:
"I was this factory worker puttering around," Withers said. "So when they said to leave it like that, I left it."

The song was originally released as the B-side to another song called "Harlem". Disc jockeys played "Ain't No Sunshine" as the single instead, and it became a huge hit, the first for Withers. 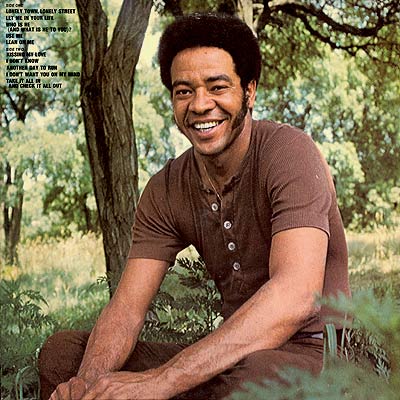 Two version for you to choose from, this version is with the lyrics shown

and this version shows him playing the number live