Bidon 5 and the piping Tuareg

Bidon 5 referred to in the following quote is a very very remote petrol station in the Sahara desert.  It was used after the first World War as a refuelling stop for small airplanes and was also used by motor vehicles crossing the Sahara.  Its particular locale was at the time of this quote ‘surrounded by mystery and terror’; for it was located in a particularly immense stretch of mid-Sahara which had been, up until the advent of motor cars and. airplanes, a forbidden death trap from which neither man nor camel, once venturing in could ever escape alive.

The area is called the Tanesruft.  It is a hard, pebbly, totally flat sand infinity in which there are no wells, springs, river beds or any oasis refuge.  Seabrook described it as ‘an immensity of stark and utter lifeless desolation.  In every direction was a bright, dead glare of nothingness, bright sand below, bright sky above.  It was like being in the centre of infinity’.

When Georges Estienne blazed a trail for motor travel he established Bidon 5 in the very centre of the Tanesruft.  ‘No man on foot or horseback, no camel no gazelle or jackal can reach Bidon 5 alive’. 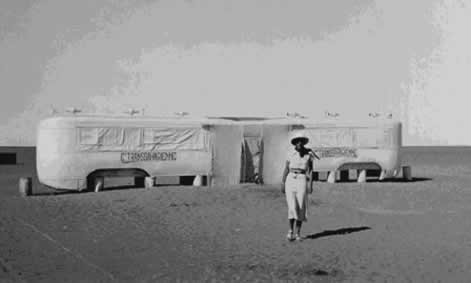 As can be seen from the photos it was at the time of the quote below two white painted dismantled bus shelters and the white gas pump.  And those who had set up the pump set up a guard.

In the first place, said Bauret, the fault was really that they had chosen the guardian badly. He was a one-eyed man named El Beshir, from the oasis, that is to say a fellow accustomed to human society, gossip, cafes, story-telIing, and crowds. Furthermore, he was a little bit cracked before he ever went to Bidon. He had a pretty wife, quarrelled with her and killed her, and then put out one of his own eyes in remorse. They had chosen him only because Arabs were superstitiously afraid of the Tanesruft and they couldn't get anybody else. They took him down there in a truck, left him plenty of food and water, and a month later Georges Estienne and Colonel Vuillemin dropped down in an airplane to see him.

He cried and was constipated and begged to be taken back to the oasis. "Why? Was he lonely?" they asked. No, he explained in tears. It was just the opposite. He said that  he was continually being visited by great caravans of Tuaregs, and now, worst of all, recently there was an old Tuareg chief with a long white beard who came every night on a camel and kept him awake all night long by playing on a flute.  They reassured him,  gave him some castor oil from the airplane engine, and promised to replace him as soon as they could.

But he didn't wait.  Eight days later when a motor truck passed,  he had disappeared, having locked up the gas Pump and the two dismantled motor-bus bodies which had been fitted with bunks and installed there as a shelter for travellers.  Of course, he couldn't go far, there was nowhere to go, but what he did for nearly a month was to run off and hide in a hole he made in the sand, every time he heard the far-away roar of a truck or airplane coming.  Then when they had looked for him in vain, had passed on and all was silent again, he would creep back for food and water.  They finally hunted him like an animal, caught him, calmed him, and took him to Gao. "Anybody would have gone crazy", he apologised, "listening to that flute."