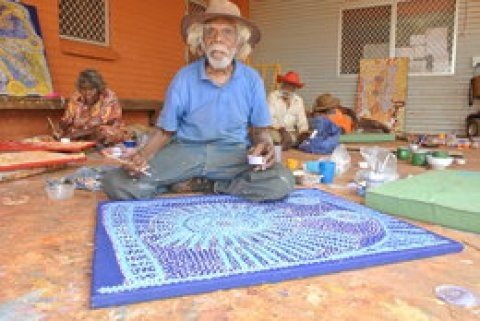 Robert Lawlor -  Voices Of The First Day: Awakening in the Aboriginal dreamtime.

One such animal dance ceremony was observed and photographed by Gillen and Spencer. More than 30 naked men gathered in a large circle. One by one, each man performed the dance of the animal to be hunted while the others sang and slapped their buttocks to create a percussive beat for the dancer. The slapping sound was so loud that it could be heard for miles across the surrounding desert. The dance continued for hours, with each man dancing frenetically until he dropped from exhaustion. The eyes of the onlookers soon became glazed with entrancement; their penises were erect in a state of ecstatic arousal. Finally, after the last man had performed the animal dance and collapsed in exhaustion, the entire group leaped on him, emitting a loud abandoned cry. The next day the hunt began.