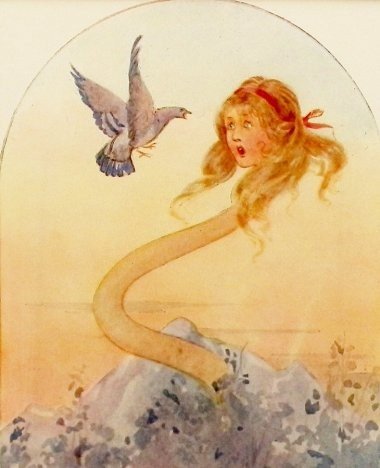 Alice remained looking thoughtfully at the mushroom for a minute, trying to make out which were the two sides of it; and as it was perfectly round, she found this a very difficult question. However, at last she stretched her arms round it as far as they would go, and broke off a bit of the edge with each hand.

'And now which is which?' she said to herself, and nibbled a little of the right-hand bit to try the effect: the next moment she felt a violent blow underneath her chin: it had struck her foot!

She was a good deal frightened by this very sudden change, but she felt that there was no time to be lost, as she was shrinking rapidly; so she set to work at once to eat some of the other bit. Her chin was pressed so closely against her foot, that there was hardly room to open her mouth; but she did it at last, and managed to swallow a morsel of the lefthand bit.
*    *    *    *    *    *    *

'Come, my head's free at last!' said Alice in a tone of delight, which changed into alarm in another moment, when she found that her shoulders were nowhere to be found: all she could see, when she looked down, was an immense length of neck, which seemed to rise like a stalk out of a sea of green leaves that lay far below her.

'What CAN all that green stuff be?' said Alice. 'And where HAVE my shoulders got to? And oh, my poor hands, how is it I can't see you?'

She was moving them about as she spoke, but no result seemed to follow, except a little shaking among the distant green leaves.

As there seemed to be no chance of getting her hands up to her head, she tried to get her head down to them, and was delighted to find that her neck would bend about easily in any direction, like a serpent. She had just succeeded in curving it down into a graceful zigzag, and was going to dive in among the leaves, which she found to be nothing but the tops of the trees under which she had been wandering, when a sharp hiss made her draw back in a hurry: a large pigeon had flown into her face, and was beating her violently with its wings.

'I'm NOT a serpent!' said Alice indignantly. 'Let me alone!'

'Serpent, I say again!' repeated the Pigeon, but in a more subdued tone, and added with a kind of sob, 'I've tried every way, and nothing seems to suit them!'

'I haven't the least idea what you're talking about,' said Alice.

Alice was more and more puzzled, but she thought there was no use in saying anything more till the Pigeon had finished.

'As if it wasn't trouble enough hatching the eggs,' said the Pigeon; 'but I must be on the look-out for serpents night and day! Why, I haven't had a wink of sleep these three weeks!'

'I'm very sorry you've been annoyed,' said Alice, who was beginning to see its meaning.

'And just as I'd taken the highest tree in the wood,' continued the Pigeon, raising its voice to a shriek, 'and just as I was thinking I should be free of them at last, they must needs come wriggling down from the sky! Ugh, Serpent!'

'Well! WHAT are you?' said the Pigeon. 'I can see you're trying to invent something!'

'I--I'm a little girl,' said Alice, rather doubtfully, as she remembered the number of changes she had gone through that day.

'A likely story indeed!' said the Pigeon in a tone of the deepest contempt. 'I've seen a good many little girls in my time, but never ONE with such a neck as that! No, no! You're a serpent; and there's no use denying it. I suppose you'll be telling me next that you never tasted an egg!'

'I HAVE tasted eggs, certainly,' said Alice, who was a very truthful child; 'but little girls eat eggs quite as much as serpents do, you know.'

'I don't believe it,' said the Pigeon; 'but if they do, why then they're a kind of serpent, that's all I can say.'

This was such a new idea to Alice, that she was quite silent for a minute or two, which gave the Pigeon the opportunity of adding, 'You're looking for eggs, I know THAT well enough; and what does it matter to me whether you're a little girl or a serpent?'

'It matters a good deal to ME,' said Alice hastily; 'but I'm not looking for eggs, as it happens; and if I was, I shouldn't want YOURS: I don't like them raw.'

'Well, be off, then!' said the Pigeon in a sulky tone, as it settled down again into its nest. Alice crouched down among the trees as well as she could, for her neck kept getting entangled among the branches, and every now and then she had to stop and untwist it. After a while she remembered that she still held the pieces of mushroom in her hands, and she set to work very carefully, nibbling first at one and then at the other, and growing sometimes taller and sometimes shorter, until she had succeeded in bringing herself down to her usual height.

It was so long since she had been anything near the right size, that it felt quite strange at first; but she got used to it in a few minutes, and began talking to herself, as usual. 'Come, there's half my plan done now! How puzzling all these changes are! I'm never sure what I'm going to be, from one minute to another! However, I've got back to my right size: the next thing is, to get into that beautiful garden--how IS that to be done, I wonder?' As she said this, she came suddenly upon an open place, with a little house in it about four feet high. 'Whoever lives there,' thought Alice, 'it'll never do to come upon them THIS size: why, I should frighten them out of their wits!' So she began nibbling at the righthand bit again, and did not venture to go near the house till she had brought herself down to nine inches high.