Alice in Wonderland - Ch 04 - 3 Pat and the cucumber frames 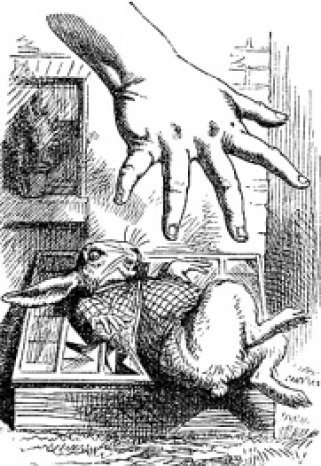 'Mary Ann! Mary Ann!' said the voice. 'Fetch me my gloves this moment!'

Then came a little pattering of feet on the stairs. Alice knew it was the Rabbit coming to look for her, and she trembled till she shook the house, quite forgetting that she was now about a thousand times as large as the Rabbit, and had no reason to be afraid of it.

Presently the Rabbit came up to the door, and tried to open it; but, as the door opened inwards, and Alice's elbow was pressed hard against it, that attempt proved a failure. Alice heard it say to itself 'Then I'll go round and get in at the window.'

'THAT you won't' thought Alice, and, after waiting till she fancied she heard the Rabbit just under the window, she suddenly spread out her hand, and made a snatch in the air. She did not get hold of anything, but she heard a little shriek and a fall, and a crash of broken glass, from which she concluded that it was just possible it had fallen into a cucumber-frame, or something of the sort.

Next came an angry voice--the Rabbit's--'Pat! Pat! Where are you?' And then a voice she had never heard before, 'Sure then I'm here! Digging for apples, yer honour!'

'Digging for apples, indeed!' said the Rabbit angrily. 'Here! Come and help me out of THIS!' (Sounds of more broken glass.)

'An arm, you goose! Who ever saw one that size? Why, it fills the whole window!'

'Well, it's got no business there, at any rate: go and take it away!'

There was a long silence after this, and Alice could only hear whispers now and then; such as, 'Sure, I don't like it, yer honour, at all, at all!' 'Do as I tell you, you coward!' and at last she spread out her hand again, and made another snatch in the air. This time there were TWO little shrieks, and more sounds of broken glass. 'What a number of cucumber-frames there must be!' thought Alice. 'I wonder what they'll do next! As for pulling me out of the window, I only wish they COULD! I'm sure I don't want to stay in here any longer!'