When Adam and Eve in Eden were, all innocent and sweet
No clothes, no cares, no worries, no cold, just glorious heat
The garden full of flowers and the plants no spines to vex
They romped and played like children for the poor dears knew no sex

They thought that playing like children was the best fun to be had
They hadn’t a clue about bonking, but despite this they weren’t sad
‘Cos what you’ve never had, you never miss (or so they say)
So holding hands and picking flowers was what they did all day

God had been very kind and filled the garden full of food
Things to eat in plenty, because he knew that starving wasn’t good
The two they slept together, hand in hand, never alone
And even though Eve’s boobs were huge, Adam sweetly thought ‘big boned’

Tis true that God spent sleepless nights thinking what to do
To create more Eves and Adams, babies - children [not just two]
But having created Eve using ribs from Adam’s chest
He’s been eyeing up Eve’s boobies as a solution for the rest

But God in rather a feckless time had had a bash at sex
And left some animals around well versed in what to do next
And they knew bonking was great fun, heaps better than the cloning
[Though you’d never have thought it from the noises of all their groaning]

And chief amongst the sexy ones was a snake whose time had come
He thought that God was nuts denying these two all the fun
So he took Eve aside and said ‘you see that tree that’s over there
Those apples are delicious, why not grab that lovely pair’

They did look good, all ripe and red and full of lovely juice
So Eve leant over and made a grab for some that were hanging loose,
And into her mouth she put them both and gave them both a suck
And Adam had an erection, ‘crumbs’ he thought, and then‘ what luck!’

And all his innocence vanished and his head was filled with lust
And into that naughty Eve his throbbing willy he did thrus
And God said ‘Bugger me the pair have somehow discovered sex
So much for controlled cloning what on earth do I do next?’

Angry now God boomed allowed ‘out of the garden GO
You’ve ruined my experiment, on cloning just for show
And Adam gave his God a stare, his innocence had gone
‘Get stuffed he said’ ‘I’m off to give our Eve another one!!’ 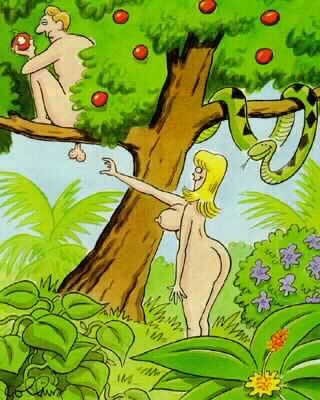