In general life here on the marsh’s outside life’s hectic scrabble
We’ve water plenty, reeds and food and mud in which to dabble
But every autumn life here becomes fraught with fear and danger
No warden to protect our lot, or helpful strong park ranger.

‘The hunting season!!!’ those few words bring darkness fear and dread
For one day we’re out dabbling and they next day – well we’re dead!
Not even safe on water for the water - safe it’s not!
For if we upend for worms to eat, it’s a bottom full of shot.

So tired we were of all this death and hunter led attack
We decided that there was the need for ducklings to fight back
Our leader said ‘they go for us, let’s go for them RIGHT NOW’
And the smallest of our group said ‘Right! But tell me just quite how?’

Well, we ducks had had it up to here with always being shot at
A touch of paranoia maybe, feelings of being got at?
But enough’s enough, so time for brains, yes folks we birds do have it
We decided to use cunning, so we asked our friend Brer rabbit.

And rabbit said ‘just use their tricks, with what do they lure you?’
We said ‘they use a plastic duck – female - good looking too – ‘
‘So’ rabbit said ‘a female hunter, now what could be neater’
‘And just to make it safer, find what they like as a tweeter’.

Well, this required some research, so we all flew into town
And watched the male of this strange species as he vaguely wandered round
And we noticed that the mags he bought, the newspapers as well
Had ladies with no feathers on and boobs the size of hills.

We stole some hardboard, stole some nails, stole saws and paint and hid it
And made ourselves a decoy (though don’t ask me how we did it)
She was curvy, she was bouncy, we put her where the water shelves
She was blonde and she was smiling – almost fancied her ourselves.

Then we stood her up (life size she was) and we hid very near
And waited there until some passing hunter should appear
Not long to wait, a hunter came he wore a hunting hat
Galoshes huge, a hunting gun, a hunting dog (quite fat).

He took up his position, so’s he could take shots at us
We stayed calm and quiet, laying low, not making any fuss
Success! He noticed on the river bank our decoy waving madly
[Thank goodness he didn’t notice that her toes were drawn quite badly].

We had bought one of those talking cards, Mae West, who could forget it
And our decoy - voice seductive - said that he should ‘come and get it’
Well our victim leapt all eager and said ‘give me my surprise’
And we gave it to him, barrels two, right between the eyes.

Well the word got round quite quickly and the rumours quickly spread
And the hunters all stopped coming in case they ended up as dead
And we ducks have peace serenity, all year the seasons through
What became of the hunter? Well he tasted quite good too. 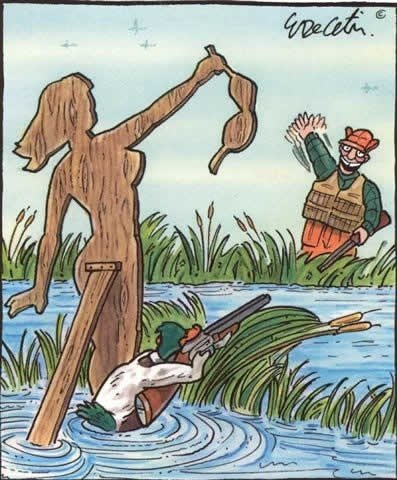