[This section is also referenced by that on the Higher spirit, Personality and Memory]

In order to be able to see how Multiple Personality fits in to the overall function of the Mind see The Model of the Mind.

The Personalities do not operate simultaneously, but sequentially. As one Personality takes over from the other, it learns and builds up knowledge in its own separate Memory, but it lays down Perceptions in the one Perceptions log. In effect, the Perception log remains a sequential record of everything that happened to that body, but the Memory is disjointed and fragmented because more than one Memory exists.

There is one ‘core Personality’ which appears to be the one the body was given on birth, but thereafter the body experiences one or more ‘rebirths’ and a new Personality is spawned. These rebirths are usually triggered by extreme trauma – abuse and torment. Although as with all these cases there can be exceptions.

In the diagram below I have shown Memory as a little green cylinder to show the effect. 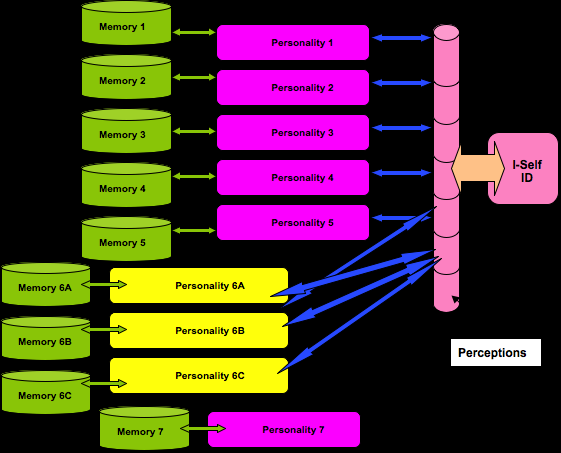 All the functions that one may think of as autonomic – so bodily functions, for example, are shared. 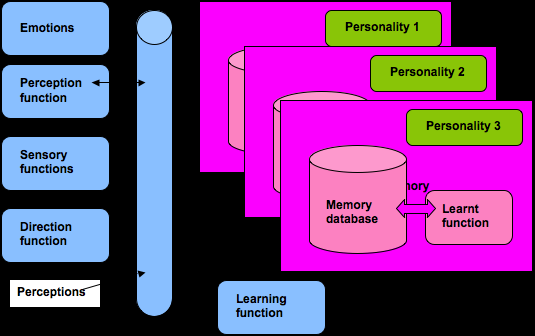 Looking at the case studies below it became clear to me that unless extremely rigorous and detailed analysis has been undertaken of each person, it is very difficult to tell the difference between a person having multiple personalities and a person who is ‘possessed’. Possession does exist, but I suspect that a number of cases of possession in bygone times were actually multiple personalities.

A possessed person exhibits many of the same symptoms as the person with multiple personality disorder, but the Personality that takes them over may be older, have language skills or abilities that could not have been acquired with the Perceptions available to the person through the Higher spirit. They also demonstrate Personality characteristics that are totally at odds with the core Personality.

But the subject is hugely complex as I think most people are aware.