A miracle is an event which, to those who have witnessed it, has not happened before.  Thus for example when I was at university I knew a chap who never paid for a round of drinks. One day he reached into his pocket, took out his wallet and  - fighting the moths - paid for a lemonade shandy for me.  No one believed it had happened - they said it was a miracle.  And indeed it was, and he didn't, to my knowledge, do it again. Such is the nature of miracles.

Fire walking might, I suppose, be regarded as a miracle to one who had never seen it before, but it is actually fairly commonplace if you look at the observations - as is walking on water, levitation, moving objects using concentration, controlling the weather, summoning animals, and healing using the power of the mind and hands - miracles all, wholly dismissed by some scientists because either they have not seen it or they can't explain why it happened.

But surely it is these very events we should be homing in on.  If we can't explain why it happened then it is our knowledge that is deficient.

An event is an event, a so called miracle is a miracle, it signals to us that we have not seen the whole picture, that there is a big gap in what we understand about the universe. 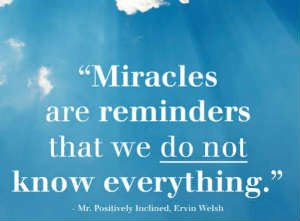 Maybe in the heart of the chap who never paid for drinks was a very kind shy man, who when treated kindly and with gentleness and not mocked for his eccentricity and gaucheness, finally showed his true colours.

To a really good scientist they should be a beacon to be followed.

To a bad scientist they are an embarrassing sign that maybe they are not as clever as they thought.  Clever men but not wise men.