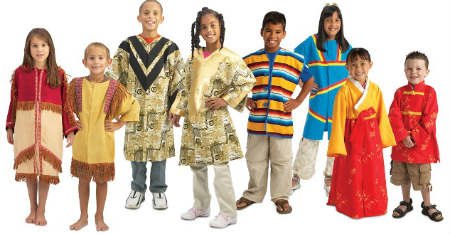 Although diversity is there for the purposes of serving the creation, there is no particular reason why the diversity provided had to be done with such flair and imagination.  With such an eye for beauty.

Sit at a street side café and watch the people go by.  Every face is different, every character and personality different.  The emotion that should be felt is one of pure joy and happiness at the magnificence of the human race.

And deep within us, we too have the love of diversity even though we create the uniform.  We personalise our cars, our houses, our phones. We decorate our bodies so that we are different from others.  When we create as individuals we always seek diversity.  We too cannot stand the monotony of sameness.

And yet in our perversity we create it, or at least – and perhaps this is the key thing – others create uniformity for us.  The manufacturers and builders and architects, create it for us.  The biologists are attempting to create it in nature by cloning.  By our actions the number of species is declining at an alarming rate as more and more become extinct – so we are eliminating diversity in part to control our environment.  Worse still the politically motivated also try to create sameness, often by law or by force.  We must all be communists or socialists, or believe in one religion rather than others.  They look for sameness of thought.  We are constantly bombarded by others wishing to make us like them.

I suggest it is a loss of all spiritual perception, and materialism as the only objective.  In effect, there are those so insecure and materialistic that their only motive is that of control, and control means elimination of diversity.

This is why the paths of the mystic and genius, poet and writer, artist and musician have always been their own.  The great never belong to ‘groups’ or ‘parties’ or ‘clubs’.